Wish You Were Here is a concept album by Pink Floyd. Recorded at Abbey Road Studios between January and July 1975 and released on 15 September 1975, the album would later be regarded as one of Pink Floyd’s greatest albums and was ranked 209 on Rolling Stone’s 500 Greatest Albums of All Time list.

Its lyrics, written by Roger Waters, concerned the music industry, and questioned the market-oriented record companies’ lack of understanding and interest for musicians. The album also pays tribute to Syd Barrett, Pink Floyd’s former guitarist and chief songwriter, especially with “Shine On You Crazy Diamond” and the title track itself.

According to the 1991 Nicholas Schaffner Pink Floyd biography Saucerful of Secrets : The Pink Floyd Odyssey, Wish You Were Here was Pink Floyd’s first album with Columbia Records in the US and Canada and its distributor CBS Records for the world outside of Europe. In Europe, the band remained with EMI under the Harvest imprint. The switch in labels, also according to drummer Nick Mason’s book Inside Out: A Personal History of Pink Floyd stemmed from the lack of promotion that EMI gave the band outside Europe, especially Capitol Records in the US and Canada. As a result in the label switch, this gave the band ownership of their recordings from that point forward – every album from Wish You Were Here onward has been copyrighted to either Pink Floyd Music Limited or (for after Roger Waters’ departure) Pink Floyd (1987) Ltd., instead of the corresponding record label.

Also according to the book Saucerful of Secrets : The Pink Floyd Odyssey (and stated on the In the Studio with Redbeard episode of Wish You Were Here), Pink Floyd entered London’s Abbey Road Studios during the first week of 1975 to begin work on their long anticipated follow-up album to their hugely successful album The Dark Side of the Moon. Although the band had three pieces of music already sketched out to be recorded (“Raving and Drooling” which later became “Sheep”, “You Gotta Be Crazy” which later became “Dogs” and the centerpiece “Shine On You Crazy Diamond”), all was not well within the band. The overwhelming critical, commercial and financial success of Dark Side of the Moon had left the band physically and emotionally drained and the band spent the first few weeks just sitting around. When the band did get around to recording, their bodies went through the motions while their minds and feelings were elsewhere.

The initial plan was to record the three tracks they had played live on their 1974 European tour (which were “Raving and Drooling”, “You Gotta Be Crazy” and “Shine On You Crazy Diamond”), but bass player/singer/lyricist Roger Waters decided to change the vision of the album, split the two halves of “Shine On You Crazy Diamond” and write three shorter songs relating to the theme of absence, two of which (“Welcome to the Machine” and “Have a Cigar”) were veiled attacks on the music business and the other (the title track) was, like “Shine On You Crazy Diamond”, about fallen Floyd member Syd Barrett. This move was, according to the Saucerful of Secrets book and in drummer Nick Mason’s book Inside Out, one of the first debates between Waters and singer/guitarist David Gilmour. Gilmour wanted to record what the band had been playing live while Waters wanted to split “Shine On…” into two halves and create a concept album. Gilmour was outvoted three to one. Despite this disagreement, plus the hardships that occurred during the recording, Gilmour and keyboard player Rick Wright revealed in 1995, on the radio show In the Studio with Redbeard (which devoted an entire episode to the making of the album) that Wish You Were Here is their favorite Pink Floyd album.

The recording took over seven months with two breaks in between recording for two U.S. tours, one in April 1975 and the other in June 1975, where they premiered the multi-part “Shine On…” suite with “Have a Cigar” bridging the two halves.

The original vinyl release was intended to be shrouded in an anonymous, all-black plastic wrapper (dark blue for the Columbia/CBS releases). Bruce Lundvall, then-president of the band’s US distributor, Columbia Records, was (according to Hipgnosis member Storm Thorgerson in the book that accompanied Pink Floyd’s 1992 box set Shine On and also his own book Mind Over Matter : The Images of Pink Floyd) appalled at the suggestion that they deliberately hide their product, so an additional image featuring the band name over the top of two robotic hands in front of the four elements was included as a sticker on top. Removing this outer wrapper then revealed the proper artwork with its now-famous cover: the flaming businessman, shaking hands with his counterpart (as in the robot image). Three other photographs on the back and inner sleeve represented the remaining elements: a faceless salesman selling Pink Floyd products in the desert (earth); a naked female figure in a grove, barely visible behind a windswept red veil (air); and a splash-less diver half submerged in Mono Lake (water). A postcard with an alternate version of the latter picture – and “Wish you were here” written on the back – was also included. All four photos in this design appeared to have each element ‘breaking’ (or burning) into the surrounding white margins.

The vinyl record’s custom picture labels depicted the robotic handshake (as on the wrapper) with a mainly black with blue prisms background. This picture label was then used again for the 1995 SBM Mastersound reissue and the 1997 Columbia/Sony remastered CD.

Beneath the outer cover, which on the U.S. release was dark blue, Columbia originally released the LP with a slightly different sleeve, using an alternative picture showing the burning man standing up straight (instead of leaning toward the other businessman) and taken from a lower angle. Columbia started using the more familiar EMI photo in 1984 for their first CD issue and kept using it in subsequent reissues, the only exception being the “SBM MasterSound Collector’s Edition”. There are other, subtler differences in the artwork of the more commonly-found remastered CD: the naked female is clearly visible behind the veil in the LP artwork, but is almost completely obscured in the remastered CD booklet; the photo of the diver used in this booklet is larger, and shows more of the background salt formations; additional black-and-white photos of the band working in Abbey Road Studios were added to this booklet as well. 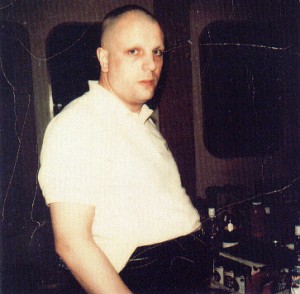 According to drummer Nick Mason’s book Inside Out: A Personal History of Pink Floyd, Syd Barrett actually turned up at the studio in the middle of a recording session on 5 June 1975, which was also, according to the book Saucerful of Secrets: The Pink Floyd Odyssey, the day David Gilmour married his first wife, Ginger. However, Gilmour denies that this was the same day during an interview in 2003, seen in The Pink Floyd and Syd Barrett Story.

Barrett hadn’t been seen by any of the band members in five years. He arrived unannounced, his head completely devoid of hair (including eyebrows, as alluded to in The Wall film) and had put on so much weight that most of the band did not recognize him at first.

Reports would indicate that Barrett repeatedly jumped up and down brushing his teeth during the visit. Waters later confided that the sight was enough to bring him to tears. While the band were listening to a song in progress (allegedly “Shine On You Crazy Diamond”), Barrett sat motionless; he is sometimes quoted as saying, when someone asked to play it back again, that this would be pointless as they had already just heard it.

In a recent televised special on Barrett, Gilmour says that it was “Shine On” that they were recording as he showed up. In the same special, he says that Barrett asked (despite the album being nearly complete) if there was anything he could do, and said that he was available if needed. Later on, one of the band’s technicians, Phil Taylor, drove past Barrett, who appeared to be looking for a lift. Avoiding an awkward situation, Taylor ducked down in the car as he passed.

In a July 2006 interview with a New York City radio station before Barrett’s death, Gilmour indicated that they never saw him again after that point. However, Roger Waters has said later on he almost bumped into Syd in Harrods, but did not speak to him. Echoing Barrett’s presence, Wright plays a subtle refrain from “See Emily Play” in the final seconds of the album.

In 2007, one of Germany’s largest public radio stations, WDR 2, asked its listeners to vote for the 200 best albums of all time. Wish You Were Here was voted #1.

In 2003, the album was ranked number 209 on Rolling Stone magazine’s list of the 500 greatest albums of all time. This happened twenty-eight years after the magazine initially panned and trashed the recording (which is not uncommon), when reviewer Ben Edmonds wrote in the 6 November 1975, issue that “Passion is everything of which Pink Floyd is devoid.” Rolling Stone once hosted the original review on their website, then removed it in favour of a 5 out of 5 star review from 2003 but recently re-instated the 1975 review.

In 1998, Q magazine readers voted Wish You Were Here the 34th greatest album of all time. In 2000 the same magazine placed it at number 43 in its list of the 100 Greatest British Albums Ever.

In 1986, Slitz (at that point the leading pop/rock magazine of Sweden, with strong new wave/post-punk credibility) invited its readers to vote for the best produced rock album of all time. Wish You Were Here was voted #1 and Dark Side of the Moon #2.