Links – Screen Capture Photos – Discuss the DVD on the forum 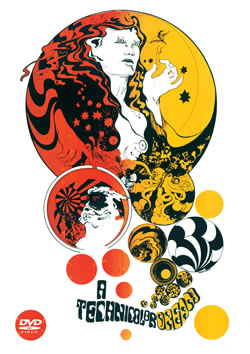 The latest DVD release that all Floyd fans should get hold of is Eagle Entertainment’s A Technicolor Dream DVD! It tells the fascinating story of the emergence of the Underground scene and features brand new original interviews with a chirpy Roger Waters, Nick Mason and other people who played a significant role in the development of the whole underground movement.

The story would not be complete of course without an analysis of Syd Barrett’s mental struggles and him “moving away” from the commercial side of music which he apparently did not enjoy. Of course, Syd famously objected to playing on Top of the Pops because he felt it too commercial and one of his heroes John Lennon didn’t have to play it!

The DVD has an excellent narrative and uses many rare video pieces to tell the story. This is fused together with modern day interviews with the likes of Roger Waters, Nick Mason, John “Hoppy” Hopkins who founded the IT magazine, Joe Boyd, Peter Jenner and more.  Unfortunately, the Technicolor Dream performance by Pink Floyd on one beautiful 1967 summer early morning is not captured in any significant way but that does not take away from the fact that the DVD is an excellent and well put together documentary.

The bonus content on the DVD features three of Pink Floyd’s first music videos from the 1960s, as well as several interviews with the likes of Roger Waters (18 minutes), Nick Mason (8 minutes), Peter Jenner (15 minutes), Joe Boyd (13 minutes) and Miles for just 3 minutes. The complete Floyd music videos are of Scarecrow (Pathe Newsreel from July 1967), Arnold Layne promo (Peter Whitehead, March 1967) and Astronomy Domine from Look of the Week from May 16th 1967.

Unfortunately the hilarious “Hans Keller Interview” with Syd Barrett and Roger Waters was not included in its entirety which is a shame. But the other bonus material makes up for it – especially Roger Waters rather amusing and animated interview!

In addition to the bonus content on the DVD, a reproduction of Mike McInnerney’s famous poster for the Technicolor Dream all night happening has been reproduced. It is only the size of the DVD case itself so it is a little on the small side. But it is a nice addition nonetheless.

The DVD sheds light on how these sorts of posters could come about as art students of the time were paid to go to university which afforded them the time to pursue other interests such as being a musician, making films or perhaps putting artistic skills to work by creating the clothes, imagery, art, light shows and other such creative efforts of the underground scene.

It is a truly excellent DVD! One for the Christmas wish list!