The Big Pink Floyd Survey 2009 was conducted in the middle of January 2009 to Early March 2009 to see who the typical Pink Floyd fan is, what they think of Pink Floyd and related solo albums and their opinions/attributes regarding other matters!

There were 2,130 surveys submitted and used to formulate the results on the following pages.  Hence this is a pretty accurate representation of the typical Pink Floyd fan.

The survey results will be presented over several short articles grouping areas such as Age, Gender and Location of Pink Floyd fans, Album Ratings, Favourite Songs and more.  Make sure you are subscribed to the NPF Newsletter to be notified when new articles presenting the results to the survey are presented here on the website.

They released their first album in 1967 called Piper at the Gates of Dawn which went on to receive critical acclaim the world over and was probably Syd Barrett’s finest piece of coherent and commercial work.

Considering Piper was released in August 1967, this makes their first album just short of 42 years old (as of March 2009 when the survey was taken).  This puts the age statistics into context.

The most represented age group is the 36-45 range with 30.4% of the survey respondents.  The vast majority of these people were not even born when Piper was released. In fact, between 60-65% of fans were not born before Piper was released!  This must go to show that the music of Pink Floyd is timeless no matter what anyone says! 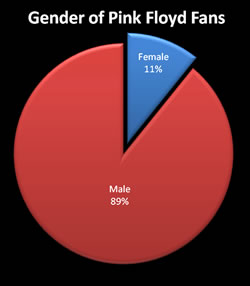 As for the gender of Pink Floyd fans, it is of no surprise that the majority are male.  It is perhaps surprising that only 11% are female.  The word of the Floyd must be spread to more females!

It is no surprise that Pink Floyd have a large following in both the United Kingdom [24.5%] and the Unites States [30.3%] which makes up over half of their fans.  The band also has a significant following in the likes of Canada, Germany, Sweden and France.

Without having completed the Pink Floyd Concert Database yet, I cannot say this with confidence, but this does seem to correspond to where they played most of their concerts!

You can download a PDF of all the countries in the survey split by male/female here. 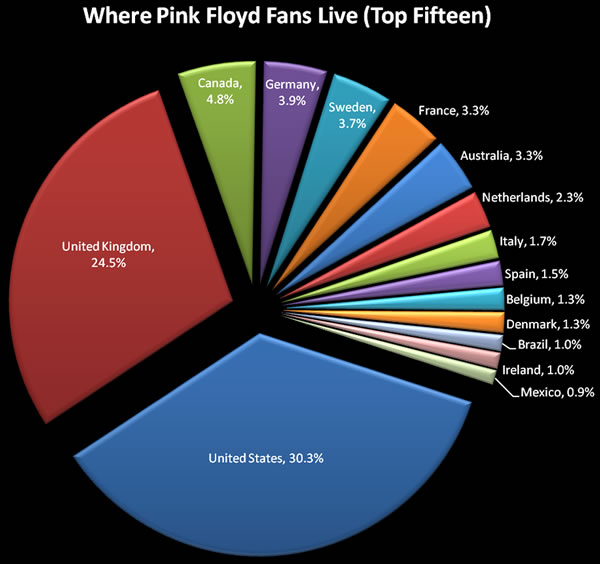 If you be nice to have your feedback on the Age, Gender and Location of Pink Floyd fans.  There is a thread on the forum here to share your views and opinions.

The next article in the Big Pink Floyd Survey results looks at Floyd fans attendance to Pink Floyd concerts and FLoyd tribute band concerts.  Click the link below for Part 2 Concerts.