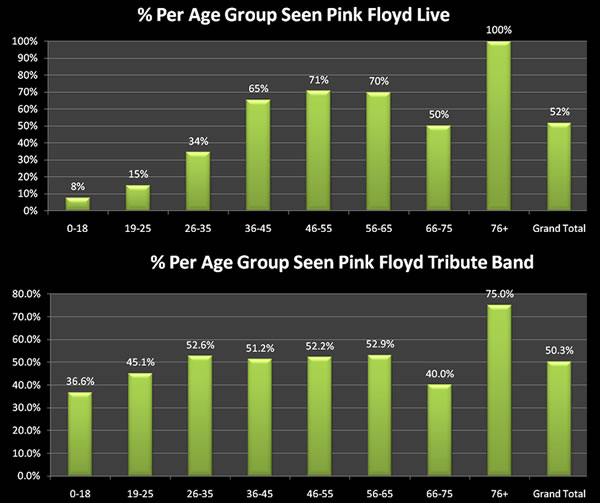 What They Could Have Seen

If you fall into this age band, which was born between 1991 and 2009, then you would at most have been 3 years old when The Division Bell was released in 1994 and toured around the world.  As 8% of people this age have seen the band live, a lot of those must have been fortunate enough to watch them during Live 8 back on 2nd July 2005.  Either that or daddy (more likely than mum as men account for 89% of fans!) must have taken the baby along to see Mr Gilmour and band on The Division Bell tour!

36.6% of the 0-18 age band has seen a Pink Floyd tribute band live.  This seems very reasonable.  The young ones were born in the wrong decade!

This age band was born between 1984 and 1990.   A Momentary Lapse of Reason came out in 1987 after Roger Waters had left the band expecting the others to go their own separate ways.  What a surprise old Rog had! Later on in the survey, we will see what fans think of this album in particular!

15% of this age band has seen Pink Floyd live compared to 45.1% for a Pink Floyd tribute band.

34% of people in this age band have seen Pink Floyd live compared to 52.6% for Tribute Bands.  The gap narrows. 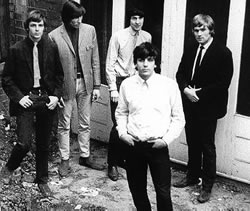 71% have seen Pink Floyd in their lives compared with 52.2% for Tribute Bands. This age band has the highest proportion of people who have seen the band live, closely followed by the next age band.

Born between 1944 and 1953, these older chaps would have had the opportunity to witness the entire history of Pink Floyd from its beginning right up until then end in 2005 at Live 8. Indeed, Nick Mason, Richard Wright, David Gilmour and Syd Barrett are members of this age group!

Born between 1934 and 1943, these old chaps could have attended every single live show if they had the will, time and the cash!  Alas, only 50% saw them live in the last 75 years! 40% have been to watch a tribute band, perhaps taking their sons and daughters along to watch whilst they recounted their memories of floating around the UFO club back in the 1960s, high as a kite, cool as a cucumber and freaking out to the Floyd!

There were only 4 respondents to the survey who had reached 76+ and 100% said they had seen Pink Floyd live compared to 75% for tribute bands.  As the group is statistically insignificant due to the small sample size, we cannot infer much about them – especially considering only 50% of the previous group had seen the Floyd live.

So, there you have it, the complete run down of all the age bands and what they could have seen played live when was released as an album and toured!

You can download a PDF of the results of the survey for this section here.

If you be nice to have your feedback on watching Pink Floyd live.  There is a thread on the forum here to share your views and opinions.