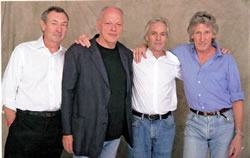 The hotly debated question of whose era of Pink Floyd was the best is one that has been debated with a passion on the internet forums!  People have sunk to new depths to defend their Syd Barrett, Roger Waters or David Gilmour led era!  Others have casually observed that they just like the music and couldn’t care less who “led” the band during the time their favourite albums and songs were released.

Another thing to be said is that all members of Pink Floyd brought something to the table (most of the time, except when Rick got fired temporarily during the Wall Sessions and beyond) throughout all three eras regardless of who “led” the band.

The soaring padded melodies of Rick Wright, the far out innovation of Syd Barrett, the musical brilliance of David Gilmour, the throbbing base lines and intellectual integrity of Roger Waters and the sparse drumming from Nick Mason who left “space” in his music for other notes to flourish all led to something brilliant.

It was thus a treat to hear and see them all together (including the memory of Syd Barrett) at London’s Live 8 event in 2005 after 24 years of being apart.

And the winner is…

For those to whom the question is important, it is the Roger Waters led era which was the best according to NPF site visitors!  He scored 82.6% of the vote which is overwhelming.  David Gilmour, with his Momentary Lapse of Reason and Division Bell got 11.2% and Syd Barrett’s Piper at the Gates of Dawn era got 6.2%.

I am sure there will be hardcore Barrett fans out there who will not listen to anything post-Barrett.  Likewise, there are probably David Gilmour led Pink Floyd fans who don’t even know who Syd Barrett is! Of course, most are Roger Waters era fans who probably don’t mind the whole journey from beginning to end.  We will see later in the survey how fans rate the individual albums and what their favourite songs are.

Pink Floyd was very much Syd’s band in the early days in the years before Piper at the Gates of Dawn was released in 1967 up until he experienced his mental breakdown due to excessive drug use and his probably underlying mental health issues.  The album has whimsical lyrics about space, scarecrows, gnomes, bicycles and fairytales, along with psychedelic instrumental passages.

There was a brief time when Pink Floyd was a 5 man band with Syd Being left at home like a “Brian Wilson” figure (5 man Floyd photos).  Even Davy O’List from The Nice stepped in for one show when Pink Floyd were supporting The Jimi Hendrix Experience as Syd was too much under the influence to play through his excessive drug use.

Shall we pick Syd up? No.

It was decided one day that the band would simply not pick Syd up to go to the gig they were travelling to.  Thus David Gilmour joined the band and Syd Barrett went off to work on his solo albums.  His own band left him behind to pursue their professional music career.

A larger percentage of women (9.52%) than men (5.79%) preferred the Syd Barrett era out of everyone who took the survey.  Perhaps because Syd was a smooth little heartbreaker back in his day! It was mainly younger respondents to the survey that preferred the Syd days which is surprising: I personally thought it would turn out to be more mature women! 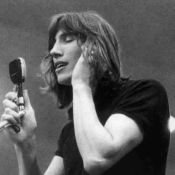 Although Roger had some songs on Pink Floyd’s debut album, it wasn’t until he was thrown in the driving seat on the second album, A Saucerful of Secrets [1968], that Roger became the lead songwriter and thus leader of the band. Saucerful does not rate highly with Pink Floyd fans as will be seen later on in the survey for some reason.

Roger continued to develop as the main songwriter over the coming years with the albums More [1969], Ummagumma [1969], Atom Heart Mother [1970], and Meddle [1971]. Although the albums are littered with Gems (a good amount of which were written by Gilmour, Wright and Mason view here), it was not until Obscured by Clouds in 1972 that Roger’s Pink Floyd really started to gel and take off. It was after this that four of the best known and highly rated albums were released thus making Roger the true “creative force” behind Pink Floyd.

In 1973, the epic Dark Side of the Moon arrived which dealt with the theme of “life and the pressures of life”. It launched the band to a new level of fame and popularity.  It was extensively toured and brought many new fans to the band.  It was perhaps this new level of fame and subsequent treatment by their record company that brought feelings of remoteness and resentment to Roger as he then went on to write Wish You Were Here [1975].

The third album of the big 4 was Animals [1977].  It was on the Animals tour in Montreal on 6th July 1977 that the infamous “Spitting Incident” occurred where a fan was climbing up the netting between the fans and the band on the stage and Roger Waters spat in his face out of frustration.  You can hear on Bootlegs recorded from that day people setting off fireworks to which Roger objected over the microphone. Download it from this page.  This incident was a catalyst in the creation of The Wall [1979].

The Wall was a very self-indulgent album with Roger Waters and his ego firmly at the centre of it.  Many people found it excruciatingly frustrating and painful to work with Roger during this period.  The tension between Roger and the rest of the band caused The Wall to be the last of the “great albums” the band would record. Of course, The Wall spawned great caricatures as developed by Gerald Scarfe, a phenomenal stage design my Mark Fisher, and The Wall movie starring Bob Geldoff as directed by Alan Parker with screenplay by Roger Waters.

In 1983, The Final Cut album was released which would be the final album Roger would work on with Pink Floyd.  Indeed, this is the only studio album in the Pink Floyd catalogue that keyboardist Richard Wright would not record on having been fired from the band by Roger and others during the recording of The Wall.  Rather amusingly though, The Wall shows made a massive loss financially due to their mammoth scale and complexity.  This loss was borne by everyone except Richard who worked as a paid musician on the tour! Ha ha charade you are Roger!

Of people whose favourite Floyd era was this one, more men (83.25%) than women (77.06%) preferred the Waters era out of all survey respondents.  With male fans making up 89% of the voters, it is quite clear that the typical Pink Floyd fan warms more to the “classic” history of the band. 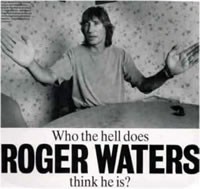 In Roger Waters mind at least, The Final Cut was to be Pink Floyd’s final album. Roger’s belief system at the time did not consider the fact that Pink Floyd could continue without him after he left the band in 1985.

The 1987 Momentary Lapse of Reason album and tour must have come as quite a shock to poor Roger! This did not go down without a bitter legal dispute in which a settlement was finally reached whereby Gilmour could continue using the name Pink Floyd.  Roger was able to negotiate the end of his previous management contract with the late Steve O’Rourke and secure the rights to various things including The Wall and The Final Cut.

The album A Momentary Lapse of Reason [1987] was generally not received well by Pink Floyd fans and the music press.  The album was considered a David Gilmour solo album in all but name.  As you will see later, fans have rated this album well below average.  It was a poor album, had generally weak pop songs, had “of the moment” 1980s production “done to it” to put it nicely and was generally not very good. None of the songs from it feature in the people’s top 20 Pink Floyd songs!

The Division Bell [1994] was more warmly received by fans which featured lyrics by David Gilmour’s wife Polly Samson. The song High Hopes is in the top 20 songs from this survey and was voted above average in fan ratings!  Amongst other places, it was recorded on David Gilmour’s Astoria Houseboat Recording Studio which is moored on the Thames to this day.

Several shows from The Division Bell tour were recorded to video tape and released as the P.U.L.S.E live album CD as well as VHS and later re-mastered and remixed (audio and video) for the DVD release.  Indeed, Wish You Were Here from the Pulse CD was the first Pink Floyd song your humble author here heard around 1994!

As with the Barrett era, the Gilmour era is slightly more heavily weighted towards female fans [13.42%] than male fans [10.95%].  The fact this era did not do near as well as the Waters era is of no great surprise as the “great 4” albums of Pink Floyd were released during Waters’ era and mostly written by him too.

For those of you who are more passionate about the David Gilmour led era who are feeling a little annoyed about David only scoring 11.2% in the favourite era vote, rest assured that David Gilmour has been overwhelmingly voted as the favourite member of the band with 52%of fans holding his as their favourite member, with Roger second with 29%, followed by Richard Wright with 9%, Syd Barrett with 8% and poor Nick with just 2%!

It is without any great surprise the order in which the results came out below.  75% of you think guitarist David Gilmour is the best musician in Pink Floyd, followed by keyboardist Richard Wright with 14.9%.  Some of you are obviously bass players yourself as Roger Waters managed 6.5% of the vote!  Guitarist Syd Barrett got 2.4% and Nick Mason (who is light years better that Roger Waters on bass) only got a disappointing 1.1%.  Other musicians got 0.1%.  Bob Klose on guitar from very early Floyd rocks!

Now you have read this part, do feel free to discuss your thoughts and feelings about this article and any issues it raises for you. Discuss here.