It is called “Pink Floyd – The Wall – An Independent Critical Review” and is billed as a “25 Anniversary Limited Edition” although it is actually 26 years since The Wall‘s release but not to worry!

The 2 DVD set includes a 72 page colour booklet with a Critical Review by producer Bob Carruthers who produced the now infamous Mostly Autumn band. Infamous in the Pink Floyd community because amazingly, last year, they were hailed as the next Pink Floyd! They wont be…. ever! You can order The Critical review from Amazon.co.uk 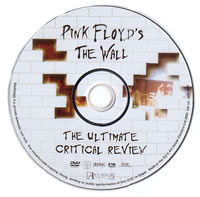 The first DVD includes the Critical Review of The Wall first put in context by a look at the likes of their previous album inspired by George Orwell’s classic book with the same name, Animals. Other context setting material includes the initial thoughts and context for Roger Waters developing the “concept” of The Wall and a look at Gerald Scarfe’s artistic contributions to the imagery of The Wall. This analysis is also covered in the accompanying 72 page glossy booklet.

The review then progresses through the 4 “sides” of the original release of the vinyl album using archive footage from other companies productions and some original interviews: but with nobody associated with Pink Floyd mind you!

Apart from the interviews with some music magazine editors and the like, there is no original material on this DVD. Most of it is taken from the likes of the 1994 BBC Omnibus feature on Pink Floyd, the 2001 Otmoor Productions production for VH1 called The Syd Barrett Story and a 1979 BBC Radio 1 interview with Roger Waters to name but a few sources. Although I would consider this a negative point, on a more positive note, the “library material” is used successfully to tell an interesting story about The Wall album.

Another striking observation is the use of a song from the Pink Floyd album David Gilmour wrote after Roger Waters departure from Pink Floyd called A Momentary Lapse of Reason. Which is what the producers of this DVD must have had when they decided to use the song Terminal Frost as background music during an interview about The Wall. Played a little loud in “the mix” as well if you ask me!

In addition to the video, there are 10 nice photos available as an extra feature on the DVD although not necessarily from The Wall performances or related. Some of them are from the 1994 Pulse tour many years later. 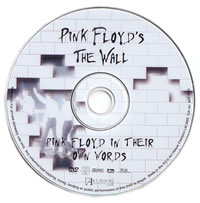 DVD 2 is a Mostly Autumn advertising feature with the full length interviews that were used in part on DVD 1 of this release!

At least with this release, they have kept Mostly Autumn out of the main video (apart from audio of a cover version of Sheep from Animals) and put them on a 2nd DVD so you have the choice to watch them or not! They perform several songs from The Wall live. Not particularly interesting but, as Classic Rock Productions parent company owns the company who own Mostly Autumn, I suppose it is rather enterprising to use the DVD as an advertising feature for them! This should not stop you buying the 2 DVD set with booklet. When making your purchase decision, just assume you are paying for one DVD and a 72 page booklet!

The Chapters for the interview section of DVD 2 are as follows:

The previous “Inside Pink Floyd” Classic Rock Productions release was basically Mostly Autumn talking about their favourite band Pink Floyd but this album is a step (not two steps mind you) away from that format. At least with this release Mostly Autumn are on a second disc.

In addition to Mostly Autumn, the second disk features a further 10 photos and some of the the full length interview clips the first DVD makes use of. The second DVD is useless and pointless and adds nothing to anything at all. Assume it does not exist! 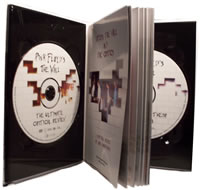 The quality glossy 72 page book which is bound within the twin DVD case follows pretty much the same structure of analysis as DVD 1 from this set. It is written by Bob Carruthers who produced no other than Mostly Autumn!

It is an interesting read, especially if you are a musician as it looks at the actual music chords, how it is played, repeated patterns and so on. Interesting stuff! It is not just about the music though. It has many quotes from the mouths of Pink Floyd as well and is a relatively concise text based look at the album. I am not sure it adds much in addition to DVD 1 mind you although is a nice addition. 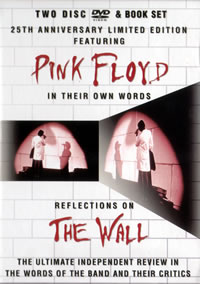 Personally, I would give Classic Rock Production’s previous release “Inside Pink Floyd” 2 stars out of 5. I will give this latest release about The Wall a more positive and well deserved 3 stars out of 5.

If you are a long standing fan of Pink Floyd, it is not likely that this release will give you anything new to chew on although it is probably worth buying in my opinion.

It is just about worth the £20.24 that Amazon.co.uk are charging for it but may be best suited to younger fans! Well done to Classic Rock Productions for their one step away from Inside Pink Floyd but lets hope their next release is a full two steps away and doesn’t bore us with Mostly Autumn!

It is released on 19th September 2005. You can order it from Amazon.co.uk