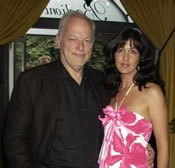 At last, the news many Pink Floyd fans have been eagerly awaiting! We are pleased to be able to bring you full details of David Gilmour’s UK and European tour dates.

David will be touring in Spring 2006, with his ‘On An Island Tour’, the title coming from Gilmour’s new solo album which is released on 6 March 2006. Amongst the shows will be two UK dates – the 29th and 30th May at London’s Royal Albert Hall.

This will be David Gilmour’s first European tour since Pink Floyd’s triumphant Division Bell tour in 1994 and his first public performance following this Summer’s Pink Floyd appearance at Live 8. He commented:

“I’m very much looking forward to this tour and making music with the great musicians in the band. I’ve had a fantastic time making ‘On An Island’ and really want to perform tracks from it, along with my more familiar repertoire. I’m rather hoping that with this tour announcement people will believe me when I say, honestly, this is the only band I plan to tour with!”

Marc Brickman, lighting genius who has worked with Gilmour on many Floyd tours, will design the lighting for the intimate venues chosen for this tour.

Here’s the full run-down of dates confirmed so far:

April: USA/ Canada: to be announced

Ticket Information for all the European concerts will be at: www.davidgilmour.com shortly.