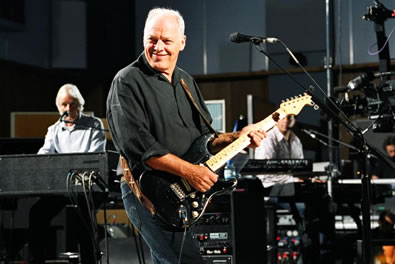 With a full live band set up in Studio One of the legendary recording studio, it was full circle for David, since the orchestral sessions for On An Island were recorded there. This time, the band performed several takes of On An Island, The Blue, Take A Breath, and Smile, from David’s On An Island album, as well as Astronomy Domine from Pink Floyd’s very first album, The Piper at The Gates of Dawn, before surprising everyone with an impromptu acoustic portion of Echoes, which delighted all those fortunate enough to be in attendance – including a small audience made up of competition winners from David Gilmour’s website’s online blog.

A Varied Jam Between Recordings!

While waiting between takes for the cameras to start rolling, the band merrily jammed on tracks as diverse as The Beatles’ Come Together, Wild Cherry’s Play That Funky Music (where Steve DiStanislao showed off his vocal, as well as his drumming, skills) and The Rolling Stones’ Play With Fire.

It was a fine way to close the tour in what was David’s final engagement of 2006.

When the broadcast has a firm time slot on Channel 4, NPF will post another news story and feature it in the site newsletter.

The show producers’ current plans indicate European broadcasts for the series in Spring 2007, and across the US on Robert Redford’s new ‘Sundance’ Channel in June 2007. In the UK, the series kicks off on Sunday 26th November with The Who and two other, as yet unnamed, artists.