David Gilmour DVD Has A Name! 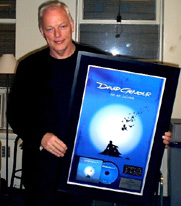 David Gilmour’s forthcoming live double DVD will be called “Remember That Night” and will be released at some point in 2007 according to David Gilmour’s website’s blog. The blog is edited by an aggressive foreigner and not David Gilmour.

According to the Features Editor on David Gilmour’s site, the High Definition DVD will be in the form of two discs featuring concert footage on one and special features on the other. The concert footage will be from the Royal Albert Hall recorded in May 2006. The extras DVD will have 3 documentaries amongst other things.

The blog is maintained by a “Features Editor” whose job it is to write the almightly blog and censor people’s opinions. It would seem the job spec is also to damage the goodwill between David Gilmour and some of his most hardcore fans! The Features Editor is well known in the community for having an exceptionally firm censorship policy and taking the piss out of loyal fans such as myself, Matt Johns who runs Brain Damage and Col Turner who runs A Fleeting Glimpse.

The Features Editor refers to the sites we have built as “tabloids” despite our hard work and efforts to add to the Pink Floyd, David Gilmour and Roger Waters communities on the internet. I felt I had to express my feelings regarding the conduct of the features editor in light of blog posts such as this one.

If you would like to discuss the features editor, you can do so on the NPF Forum where I have suggested starting a petition to present to David’s management to have the Features Editor replaced with someone with a bit more respect.