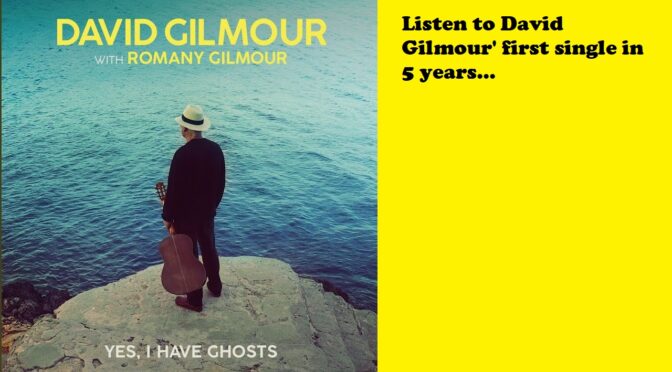 David Gilmour has released his first music in 5 years and recorded it on lockdown with his daughter Romany Gilmour. The beautiful song features in David’s wife’s new audio book A Theatre for Dreamers and is now available to stream online.

You can listen to the song in the video below, lyrics are below too. Leave us a comment and let us know what you think of the song. Discuss on Forum.

“Yes, I Have Ghosts” Lyrics by David Gilmour and Polly Samson

The heat of the sun stayed on through the night
Made specters of strangers playing games with my sight
I passed through the station, a face in the crowd
The whistle was blowing, the barrier came down

There was my baby, in another’s embrace
I called out her name in shame and disgrace
Yes, I have ghosts, not all of them dead
Making dust of my dreams, spinning round and around
Around in my head

Train on the tracks, teeth of the zip
The slider moves down, we were joined at the hip
Stealing the groove, the widening gap
Unfastening rails from a past with no map

Yes, I have ghosts, a fleeting sight
It’s always the living that are haunting my nights

Where is the sweet soul that you used to be
Gone like a thistle that’s blown on the breeze
I guess when it’s over, this haunting will end
The waiting, the baiting, my killer, my friend

Yes, I have ghosts, not all of them dead
And they dance by the moon, millstones white as the sheet
On my bed

Yes, I Have Ghosts is the first new song from David Gilmour in five years and features the voice and harp playing of his daughter Romany. The inspiration for the track was Polly Samson’s new novel A Theatre for Dreamers.

Of Yes, I Have Ghosts, David says “I was working on this song just as we went in to lockdown and had to cancel a session with backing singers but, as it turned out, the solution was right here and I couldn’t be happier with the way Romany’s voice blends with mine and her beautiful harp playing has been another revelation”.

The song has previously only been available as part the ground-breaking audiobook for the novel. Polly Samson, who wrote the lyrics, says “Collaborating with David – as I have done many times over the last 30 years, writing songs for both Pink Floyd and his solo albums – we were able to bring together the worlds of literature and music to enhance the listening experience and connect with audiences in a way which I don’t think has been done before”.

Here are some links to explore: