Pink Floyd’s very own David Gilmour wrote an article for the Guardian Newspaper on 2nd July 2009 as part of the papers 40th Anniversary celebrations regarding putting a man on the moon.  It was regarding Pink Floyd’s atmospheric tune “Moonhead”, performed live on July 20th 1969 in a BBC TV studio. You can read said article below. 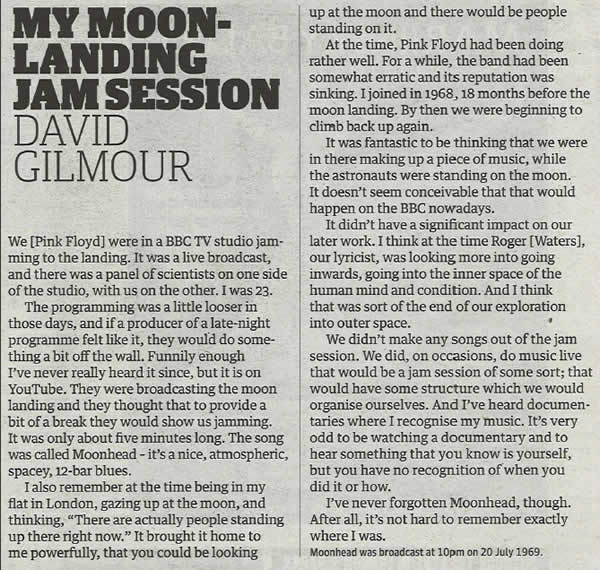 We [Pink Floyd] were in a BBC TV studio jamming to the landing. It was a live broadcast, and there was a panel of scientists on one side of the studio, with us on the other. I was 23.

The programming was a little looser in those days, and if a producer of a late-night programme felt like it, they would do something a bit off the wall. Funnily enough I’ve never really heard it since, but it is on YouTube. They were broadcasting the moon landing and they thought that to provide a bit of a break they would show us jamming. It was only about five minutes long. The song was called Moonhead – it’s a nice, atmospheric, spacey, 12-bar blues.

At the time, Pink Floyd had been doing rather well. For a while, the band had been somewhat erratic and its reputation was sinking. I joined in 1968, 18 months before the moon landing. By then we were beginning to climb back up again.

It was fantastic to be thinking that we were in there making up a piece of music, while the astronauts were standing on the moon. It doesn’t seem conceivable that that would happen on the BBC nowadays.

It didn’t have a significant impact on our later work. I think at the time Roger [Waters], our lyricist, was looking more into going inwards, going into the inner space of the human mind and condition. And I think that was sort of the end of our exploration into outer space.

We didn’t make any songs out of the jam session. We did, on occasions, do music live that would be a jam session of some sort; that would have some structure which we would organise ourselves. And I’ve heard documentaries where I recognise my music. It’s very odd to be watching a documentary and to hear something that you know is yourself, but you have no recognition of when you did it or how. I’ve never forgotten Moonhead, though.

After all, it’s not hard to remember exactly where I was.