Davy O’List and The Attack!

Chat about this on forum | 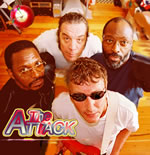 Davy O’List (who once played in Pink Floyd in the early days) is to join his band “The Attack” to play at The London Astoria on Saturday, 20 November 2004. Also featured are Jan Akkerman and a Pink Floyd Tribute band!

David O’ List and The Attack also appear at the Jimi Hendrix Festival in Bucharest and European dates are being added.

The Attack will re

lease a new single and an album plus a follow up to ‘We Don’t Know’ especially for the Japanese market and Japanese General Radio, titled ‘And We Still Don’t Know’ – The Attack originally formed by David to promote a new sound that stylized a blend of American Soul and Blues with his own brand of British Rock grew fashionable and The Attack became part of a new movement that included James Brown, Marvin Gaye and The Who called “The Original Style Movement.”

The Attack found brilliant radio success with their second single ‘Any More Than I Do’ – John Peel used it continuously for his radio programme signature tune. From this success David went further to invent another new music concept which orchestrated Classical Music, Contemporary Jazz with Pop and Rock. Then David formed a new group which he christened The Nice to perform and record his new music concept for The Rolling Stones record label using Andrew Loog Oldham as his manager. David was trained at The Royal College of Music and used the foundations of classical music, his family’s theatrical back ground and ‘the original style movement’ to produce a new hit group with a new and exciting original sound. The sound became known as Progressive Rock, The Nice becoming the first Progressive Rock group in history. A new era began and many new groups round the world followed the Progressive Rock trend laid down by David and The Nice which is why David O’ List and The Attack are a main feature on the PROGENY FESTIVAL at the LONDON ASTORIA on 20 November 2004 David O’ List being the major innovator behind the British PROGRESSIVE ROCK MOVEMENT that encircled the globe.

THE GENIUS OF PROGRESSIVE ROCK – PROGENY

THE ATTACK’s new ‘live feel’ album draws power from The Original Style Movement, Progressive Rock, Blues, Soul and Contemporary music in vogue. “And the birth of a new sound force has evolved” – The Attack – with the super amazing DAVID O’ LIST; lead singer and lead guitarist from The Nice, The Pink Floyd, Roxy Music, John Cale and The Velvet Underground in magnificent form. Dave is also a film director and film writer and had two films shown at the British Short Film Festival. He has also made films for Ericsson Telephones and produced dance videos

ADE Cook on Hammond organ also known as ‘Ace’ has many big credits; Steel Pulse, Frankie Goes to Hollywood, The Moody Blues and Stevie Wonder, was recording with Mick Jagger and Dave Stewart recently for the movie sound track of the new Hollywood remake ‘ALFIE’, soon to be screened world-wide. Ade has an original soulful organ style full of superior technical virtuosity one of the best organists you will see around.

On the bass and drums, stage name “The Engine Room” is SPY on bass guitar – a star performer whose backing singing delivers undeniable soul power to compliment David’s soulful lead vocal. Spy is also an actor and model. Spy recently starred in the IPA beer commercial running between European Cup Football matches on ITV and was in the Daily Mail Colour Magazine supplement advertising holidays for Spanish Tourism. Spy has
also appeared in East Enders, toured with Desmond Dekker and appeared on the 2004 UK Blondie tour. SAM Kelly on drums is The Attack’s brilliant, earthy, powerful, soulful drummer. Sam has Blues, Soul and Fusion back ground that suits The Attack down to the ground. Sam has played with; Ben E. King, Billy Ocean, Desmond Dekker, Eddie Floyd, Dr. John, Robert Plant and Ruby Turner, etc. “The Engine Room” is a super smooth ride that grooves under the awesome guitar and keyboard power of Ade and Dave – so take the ride!

The Progeny Festival on Saturday 20 November 2004

Recently The Attack’s first single ‘We Don’t Know’ was re released by Universal (U-music) on a compilation Mod Music box-set also featuring James Brown, Marvin Gaye and The Who. ‘We Don’t Know’ became a hit on Japanese Radio through 2003 – 2004, the box-set selling

a jumbo 75,000 copies in Japan alone! So a brand new album of Attack tracks was due. A follow-up to ‘We Don’t Know’ titled ‘And We Still Don’t Know’ may just set
those DJ mats alight again!

David O’ List is featured in the new Roxy Music book ‘The Thrill Of It All’ by David Buckley – the Mojo magazine CD reviewer – and surf the Roxy Music fan site www.vivaroxymusic for the new interview with David O’ List about the birth of Roxy Music which he co-formed.

The Attack was originally formed by singer/guitarist David O’List in London (1966) featuring a fusion of American Soul and Blues which became part of a new movement called ÒThe Original Style MovementÓ that included artists such
as James Brown,

Marvin Gaye and The Who.

After The Attack David O’List was a founding member of The Nice in 1967, one of the first British pioneer rogressive rock bands ever, featuring David OÕ List on guitar as well as Keith Emerson on keyboards. After The Nice’s split in March 1970 when Keith Emerson formed the legendary trio Emerson Lake and Palmer and during the early 70’s, David O’List worked with other renowned artists such as Roxy Music, Pink Floyd, John Cale and The Velvet Underground.

Jimi Hendrix originally booked The Nice for his historic 1967 tour of England after being knocked out with their set supporting him at The Marquee Club in London. On the tour (which included The Albert Hall) David and Jimi became great friends and met up after the tour to jam in clubs and to meet socially in London. Also, Jimi invited David to attend the Electric Lady Land session at Olympic Studios. They lived only a few streets away from each other in Kensington. This is one of the reasons OÕList will be able to transmit Òthe spirit of Jimi HendrixÓ at the Jimi Hendrix Festival in Bucharest. O’List is also a film director and film writer, having had two films shown at the British Short Film Festival and has also made films for Ericsson Telephones and produced dance videos for BMG Records. OÕList is
presently planning a new Sci-fi thriller for TV and Cinema which may come out in book form first.

The Attack’s organist Ade Cook – also known as ÔAceÕ – is a master of the Hammond organ and has played with artists such as Steel Pulse, Frankie Goes to Hollywood, The Moody Blues, Stevie Wonder, Mick Jagger and Dave Stewart.

The AttackÕs first single ÔWe DonÕt KnowÕ was recently rereleased by Universal (U-music) on a compilation Mod Music box-set also featuring James Brown, Marvin Gaye and The Who. ÔWe DonÕt KnowÕ became a hit on Japanese Radio through 2003 – 2004, with the box-set selling a jumbo 75,000 copies in Japan alone. The single is to be followed by a new album titled ÔAnd We Still DonÕt KnowÕ which makes it the firs

t studio album of the band ever recorded.

The original group, a mid-60s mod-influenced UK pop act formerly known as the Soul System, comprised of Gerry Henderson (bass), Richard Shirman (vocals), David OÕ List (guitar and vocals), Bob Hodges (Hammond organ), Alan Whitehead aka Noddy (drums) and later Barney Rubble (drums). They were signed to entrepreneur Don Arden’s agency, Galaxy Entertainments, in the hope of emulating the success of his other protŽgŽs, the Small Faces. The
Attack’s debut for the Decca Records label was a cover version of the Standells’ “Try It”. The B-side ÔWe DonÕt KnowÓ, the first tune David OÕ List wrote for Decca, was the one that recently became a hit in Japan. The AttackÕs second single ÒHi Ho Silver LiningÓ was backed by ÒAny More T

han I DoÓ and that became John PeelÕs signature tune for his radio programme Perfumed Garden on pirate Radio Caroline, moored off the Thames estuary in 1966-7.

Richard Shirman the original soul singer recently contracted MS. David and The Attack have planned an Albert Hall charity appearance in association with the MS Society in aid of the MS Society to be staged later next year. The rest of the acts are to be confirmed. The Attack plan tours in Romania, Japan, Mexico……and to all the countries they didnÕt forget with an album and single in the pipe line.

With their unrelenting blitzkrieg of amour plated rock’n’roll torpedoes, their live shows are legendary. So, stop messing about – rock wants a word with you, and it’s working for David OÕ List.