P·U·L·S·E (video) - Differences between all the versions

P·U·L·S·E (video) - Differences between all the versions

There are many differences between the several releases of the P·U·L·S·E video. Here’s a comprehensive description of them:

The October 20th, 1994 live broadcast was the seventh concert of the Earls Court dates (eight, if we count the cancelled first performance). This specific date was broadcast live to UK and Europe, and the TV event was simply called “Pink Floyd in concert - Live From Earls Court London” at the beginning of the video. A most generic title indeed.

This broadcast was characterized by several unique elements:
This broadcast also had the “Featuring Dark Side of the Moon” wording just before the musicians’ credits appear at the beginning of SOYCD. From now onwards I’ll refer to this original live broadcast version simply as “OLB”.

A digital transfer (VHS to DVD) of the German premiere broadcast can be found on specialized Pink Floyd trading sites/Hubs.

During the month of November, 1994, the PPV event was broadcast in several countries in different dates. The video is essentially the same as the OLB, but with the following differences:
All these little differences amount to about 2 or 3 minutes throughout the show. As for the rest of the PPV, it is exactly the same as the October 20th broadcast. This means both OLB and PPV coincide in more than 98% of the video. However, the audio in the PPV is fixed in SOYCD.

A digital transfer (VHS to DVD) of the North American PPV broadcast was made by Pigs On The Wing (POTW-DVD15) and can be found on specialized Pink Floyd trading sites/Hubs.

The video was commercially released on June 6th, 1995, and is a heavily reworked version of the original broadcast. It was released on VHS, VideoCD, and Laserdisc. The LaserDisc had the exact same camera edits as the VHS and VCD, but a different track order to accommodate Dark Side of the Moon uninterrupted on side 2 of the first disc, leaving OOTD, WYWH, CN, and RLH on side 3, all as encores (side 4 of the LD was empty).

And when I say “heavily reworked” I do mean it: while the October 1994 OLB and the later November 1994 PPV coincided in more than 98% of their video edit, the 1995 VHS release coincides with it in about 60%. There are many shots taken from different cameras, many close-ups are different, and there are also many different wide shots from other angles. And it was the first time the P·U·L·S·E name was affixed to the video.

But this 1995 release also had some very remarkable differences besides just the camera angles. Here is a complete list, as compared to the OLB/PPV:
These changes meant that the first official release of the video was a “cleaned-up” version that fixed all the mistakes of the OLB. It also became the standard for 11 years until the upgraded official DVD was released. However, some +3 minutes were cut.

After a very long wait, the DVD release of P·U·L·S·E finally saw the light of day. The video received a major upgrade in terms of quality making it a lot sharper, with a better definition in details, and less color bleeding. Many parts of the video of the DVD coincide with the 1995 VHS release. However, there are several other shots that use different cameras, and some close-ups replaced wider shots. The most important differences between this 2006 DVD release and the previous versions are the following:
All the other cuts (Sorrow, One of These Days, On the Run, Comfortably Numb) are the same as in the 1995 video. The new cut in TGGITS deleting a good part of Claudia Fontaine’s performance is present in this DVD for the first time. The 2006 DVD also uses more travelling shots, and more zoom out/in shots than the previous release.

In 2019 as part of The Later Years boxset, the P·U·L·S·E video received again a quality upgrade (as much as the tapes allowed) for its first release in BD.

All of the cuts and omissions of the 2006 DVD release are also present in this version, and again have been disguised with the video edition. This means that Sorrow, One of these Days, On the Run, TGGITS and Comfortably Numb are noticeably shorter than in the original broadcast, and the cuts done to High Hopes, Time, and other cuts between songs are also present.

The most notable difference of this version when compared to the others is that this time there are many more close-ups of the Floyd, the accompanying musicians, and the background singers. You can see much more of each in action. This is accomplished by sacrificing many shots of the Mr. Screen videos and shots of the arena. Meaning the spectator loses most of the visual narrative of the SOYCD and HH videos. This also happens during Time, where more shots of the band are shown during the song to avoid showing the old accompanying 3D graphics of the screen video.

For the 2019 version many shots of the background singers and the musicians are shown instead of the “ENIGMA” lettering on the screen at the beginning of “Another Brick in the Wall”.

The opening credits of the 2019 version are stylistically very different to the other releases. But essentially show the same information (minus “recorded at Earls Court”).

In the closing credits, the “Special Thanks to everyone who came to the Earls Court Concerts” message has been moved again to the end, and is now accompanied by a new “very special thanks to Polly Samson” message that had not appeared in any of the previous editions. A couple of additional lines about the video restoration have also been added to the end credits. Since now all the concert can be present in one disc, the intermission shows some more seconds of audience during the transition to part 2 of the show.

At the time of writing this article, the re-edited 2019 version of P·U·L·S·E could only be obtained by buying the Later Years boxset. It is presented in Blu-Ray and DVD.

While many of the shots that correspond to the beginning and endings of songs have remained mostly unchanged (or just very slightly changed) through the several incarnations of P·U·L·S·E, many in-between shots during the songs, solos and riffs have changed in every release. There are occasions when all 5 versions of the video coincide in the same shot during the songs, but they’re very short too. Some of the changes are minor, like slightly different cameras, or changing a static shot for a travelling shot. Remarkably, in quite a lot of places the Gilmour close-ups were changed from showing his right side in the original broadcast, to showing much more of his left side in the later releases.

The bigger changes are related to the cuts that effectively shorten the songs in the later editions. So, if you wish to have a complete P·U·L·S·E you’ll need to source a copy of the original broadcast or PPV. The second longest is the 1995 edition; for this you’ll need to get a very good rip of the VHS (or a good LaserDisc rip, but you’ll need to reorganize some of the songs).

Hopefully this document has helped to expose all the main differences between the several releases of the P·U·L·S·E video, and serves as a reference on the edits that have been made to the product in the course of 25 years.

APPENDIX
Some screencaptures comparing the main differences of the P·U·L·S·E releases: 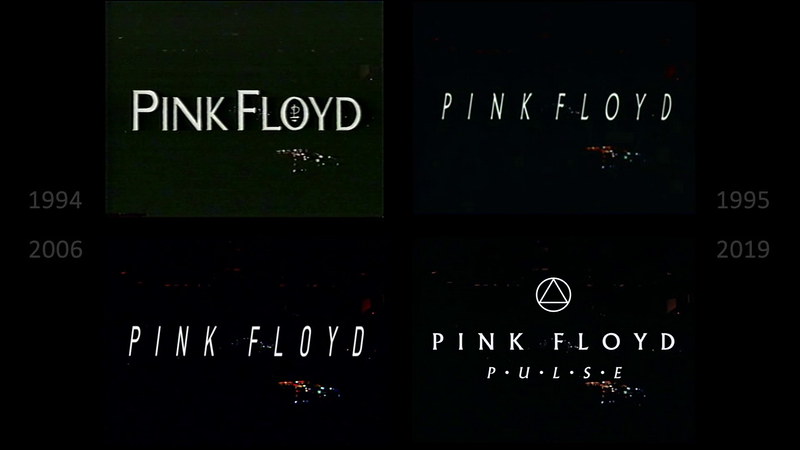 Opening credits of the different versions. 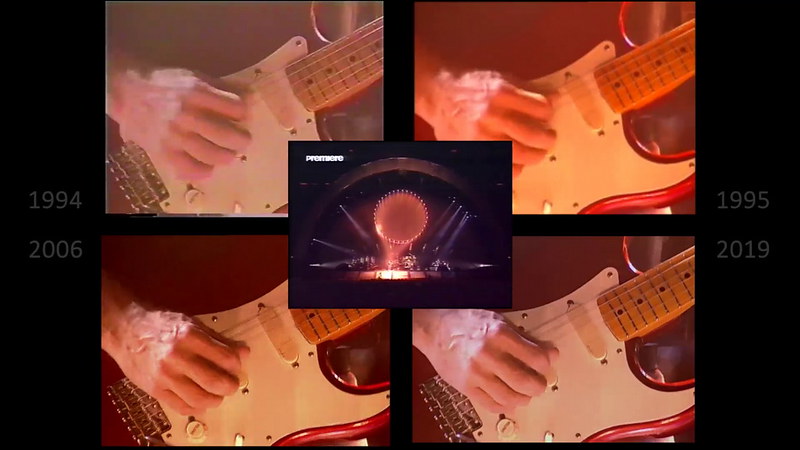 Shine on You Crazy Diamond: the beginning of the lyrics. 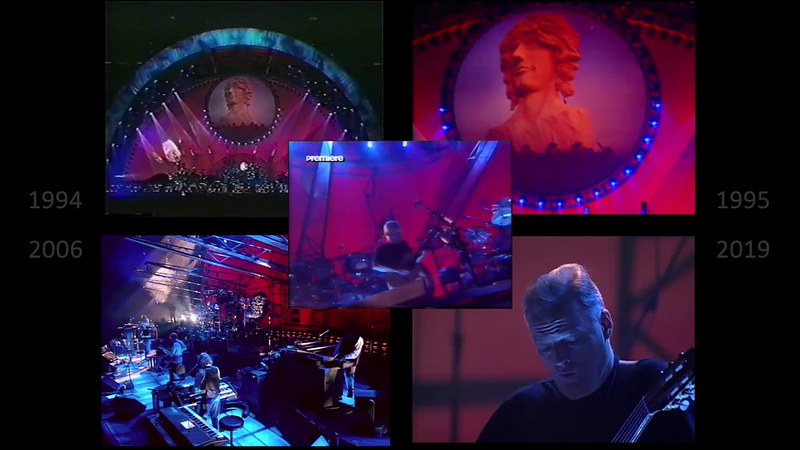 Ending of High Hopes. Different shots in every version. 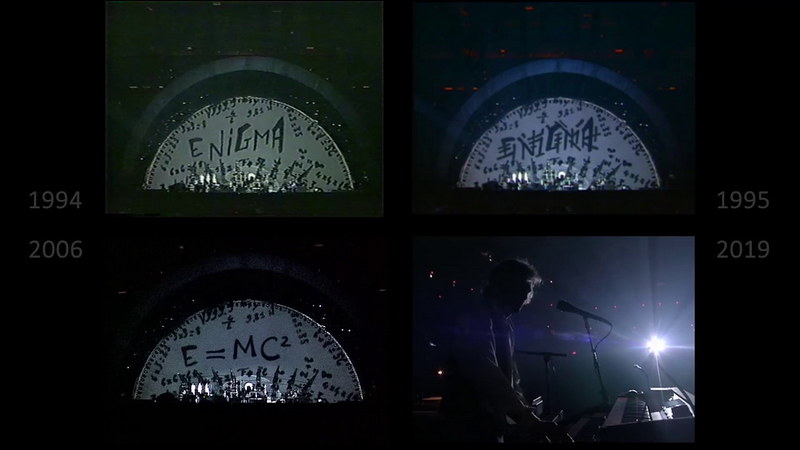 The ENIGMA lettering on the Screen during Another Brick in the Wall – Part 2. 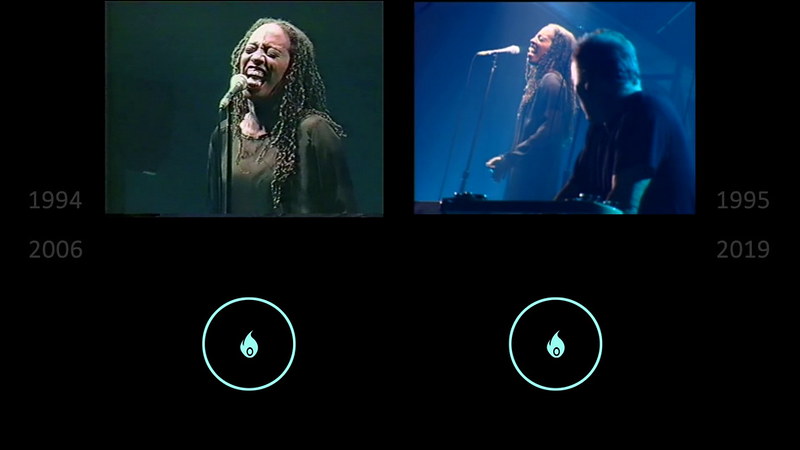 Claudia Fontaine’s performance was shortened in the 2006 and 2019 releases. 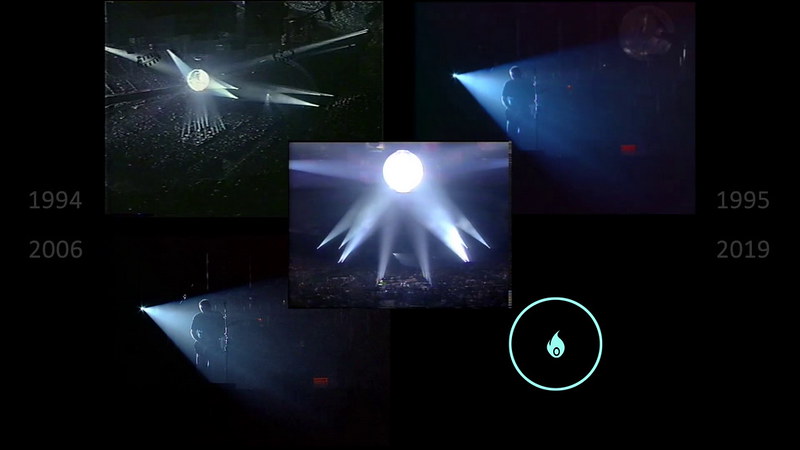 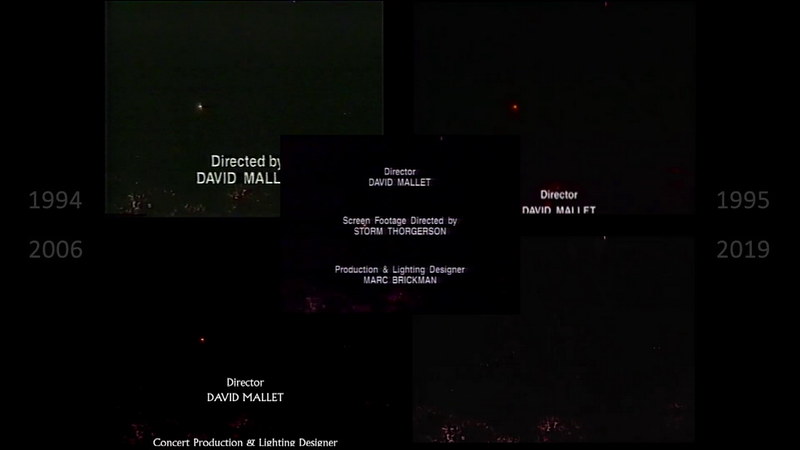 Closing credits of the different versions.

For a PDF version of the above post to keep in your archives, please follow this link:
https://drive.google.com/open?id=1iO5HZ ... Nr-gzpIHnf
Includes the same texts, but some more screencaps.

Many thanks for this insightful post, and the attached files as well. I have an old VHS recording from the BBC of this concert that I think might be the Original Broadcast along with a Pink Floyd documentary either before or after it.

Of course I also own the DVD but I've always been very interested in the subtle differences between each version. I had no idea that pieces of Comfortably Numb were even altered!

Master_Chief wrote: ↑Wed Jan 08, 2020 4:48 pm ...I have an old VHS recording from the BBC of this concert that I think might be the Original Broadcast along with a Pink Floyd documentary either before or after it....

Hold to it dearly!!!
And if possible get a good digital transfer of it. The original October 20 broadcast we have is from the German TV, with the presenter talking over the beginning of each part. But so far I have not located a BBC copy of it. Yours may be unique.
Top

pfwaters wrote: ↑Tue Aug 11, 2020 6:39 am hi dear
1994 - Original Live Broadcast
please help me for download this version
i have this version but part 2 is incomplete
thanks

my version of german tv .
part 1 is full but part 2 run like hell is half and ending
Top

"A thanks to our dear friend Roger, (wish he were here)". (something like that)

Unless I'm hallucinating? (Which is entirely possible!!!!) David says this at the very end of the show while saying "Good night" and the band was waving to the crowd. This scene was new and added back in on the 2019 version.
Top
7 posts • Page 1 of 1