Talk about other Floyd related musicians here.
4 posts • Page 1 of 1

Anybody else going to see it? I saw on his tour dates some twin bills with Yes.

That makes sense to fill up some larger venues but I also saw a twin bill listed with Floyd knock-off band "Which One's Pink" who was on the American cable network AXS once and was very good. Yet, Alan sold 30 million records of his own music worldwide, so it seems strange that he would share the stage with a tribute group. Or is it just be being overly picky here?

In any case, I have 10th row main floor tickets for a show in late March and as far as I can tell, it will be just Alan doing the same 2 sets plus a two song encore as in most of the cities. (I don't think "La Sagrada" is going to be played in every city) 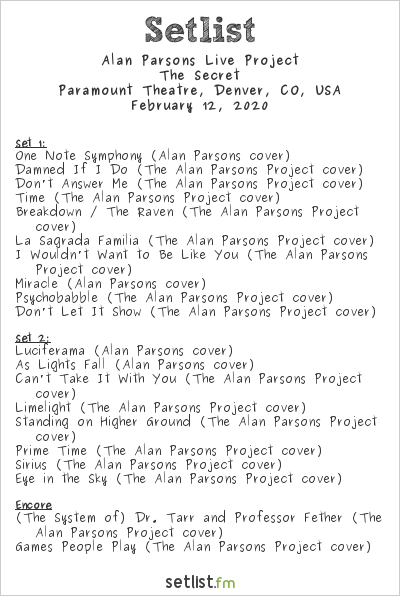 I saw him last year and he was doing this same setlist. It was an awesome show; really enjoyed it.
Top

He's really not playing all that many shows without Yes, so the AP fans need to go see him or forever hold your peace. He's over 70 years old.

I've seen him a few years ago. Musically, it was mostly excellent (just a shame that The Raven and Turn of a Friendly Card were mere snippets because they had to do all of I Robot, which includes two taped tracks...). I wasn't happy about the overly loud sound though!

Got to say, I really like his new album The Secret (which is thankfully represented with three songs in the setlist). It's a grower; give it time.
Top
4 posts • Page 1 of 1