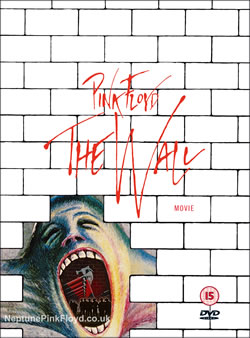 ?The Wall ? The Movie,? Alan Parker's extraordinary film, starring Bob Geldof, was originally released in 1982. The album that inspired the movie, Pink Floyd?s groundbreaking ?The Wall,? this year celebrates its 25th anniversary. To commemorate these two landmark releases, Sony Music is to re-release the movie on DVD on 1st November 2004.

This Limited Edition re-issue will be packaged in a deluxe DVD digi-pak designed to look like The Wall with debossed brick work and a see through slipcase. Inside the digi-pak will feature a photo montage of film shots and a re-production of the original film promotional poster. This new edition also features new subtitles.

All artwork and design has been co-coordinated by original Floyd designers Storm Thorgerson and Peter Curzon.

"The Wall,? conceived and written by Roger Waters, and directed by Alan Parker, tells the story of a rock star's descent into madness as he ponders his meaningless existence. Abandoned by his father during World War II, smothered by his mother thereafter, and punished in school for writing poems, he steadily builds a wall around himself. The style of the film is that of a 95-minute music video; there's virtually no dialogue, just songs and visuals, including the startling animation of British caricaturist Gerald Scarfe

In additional to the original ?The Wall? film, this DVD contains several fascinating extras. As well as a promotional feature from 1982, the two-part retrospective documentary will prove fascinating for Pink Floyd fans. There is also a rare and insightful interview with Roger Waters in which he discusses the autobiographical inspirations for his musical masterpiece. Director Alan Parker, animator-designer Gerald Scarfe, cinematographer Peter Biziou, and producer Alan Marshall all contribute several interesting observations. The audio commentary by Waters and Scarfe adds depth to their documentary interviews.
Last edited by Keith Jordan on Thu Oct 07, 2004 7:27 pm, edited 1 time in total.
Top

Charade I am
Judge!

No, I hate when this happens. I already have the version on dvd, but looks like I bought it for nothing. I hate it when every time I buy a version, they?ll release (the industry) a new one not just to "celebrate" an anniversary but to get more money....
Top

I already have it on DVD too. I'm not gonna buy it again...
Top

Charade I am wrote:No, I hate when this happens. I already have the version on dvd, but looks like I bought it for nothing. I hate it when every time I buy a version, they?ll release (the industry) a new one not just to "celebrate" an anniversary but to get more money....

Pugs on the Wing
Judge!

No, as everyone else above me said, I already have it on DVD.

Maybe if there were some goodies, but just a repackaging isn't enough of a goodie.

BTW, why does Storm have his hand in it? Isn't that moving in on Scarfe's domain a little?
Top

It'd be nice an audio album with the movie versions, imo.
Top

I am not gonna buy any Wall-connected DVDs unless it's the complete deluxe edition of 'The Wall Performed Live 1980-81'. We are waiting for THAT and no other moneymaking releases like this. A digipak-version of the 1999 version is available, so what's new? A better quality of the theatralical trailer? Hooray! A photo-montage inside the package? Hooray!

So, I think it is "just a waste of time" and money.
Top

i already have the movie on dvd
Top

let me know when an actual concert is officially released on dvd....
Top

I would hate for it to be said that I'll buy something just because the packaging is different...but I'll wait until I hold a copy of it in my hot little hands before I decide whether or not I'm going to buy it.

On a similar note: I have about 9 versions (different cuts) of Dawn Of The Dead on VHS, and one copy on DVD. I just saw a new DVD with three different cuts of the film and about the same special features as the DVD I already have. I probably already have the two additional cuts on VHS...but now, I'm thinking about buying the new DVD set.

it's not really sad if you're into the movie and like to see different versions of it. (i only have dawn of the dead the director's cut on vhs so far!

) it depends on how much i like the movie or band that determines my purchasing an updated version. sometimes the added features make it worth buying again.
Top

They are sending me a free promotional copy for review. Nice!

yea i will get my wife to buy the new version for me, from my local hmv store, then i will take my regular dvd version back to the same store on the new receipt......and get a full refund........ha..ha..!!
Top

I don't think that there's anything on here that's not on the release that I've got so I won't be getting either.
As others have said, let's have a proper DVD version of the live show.
Top

Eclipse wrote:It'd be nice an audio album with the movie versions, imo.

i totally agree. in the booklet of Echoes (compilation) its says that WHEN THE TIGERS BROKE FREE is found on the wall SOUNDTRACK. it hasn't even been bloody released on CD or anything.
Top
31 posts