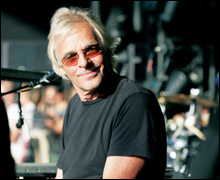 No one can replace Richard Wright. He was my musical partner and my friend.

In the welter of arguments about who or what was Pink Floyd, Rick's enormous input was frequently forgotten.

He was gentle, unassuming and private but his soulful voice and playing were vital, magical components of our most recognised Pink Floyd sound.

I have never played with anyone quite like him. The blend of his and my voices and our musical telepathy reached their first major flowering in 1971 on 'Echoes'. In my view all the greatest PF moments are the ones where he is in full flow. After all, without 'Us and Them' and 'The Great Gig In The Sky', both of which he wrote, what would 'The Dark Side Of The Moon' have been? Without his quiet touch the Album 'Wish You Were Here' would not quite have worked.

In our middle years, for many reasons he lost his way for a while, but in the early Nineties, with 'The Division Bell', his vitality, spark and humour returned to him and then the audience reaction to his appearances on my tour in 2006 was hugely uplifting and it's a mark of his modesty that those standing ovations came as a huge surprise to him, (though not to the rest of us).

Like Rick, I don't find it easy to express my feelings in words, but I loved him and will miss him enormously.

Have there been any reactions from Waters or Mason yet?
Top

Damn. That got my crying again. I thought I was done with that. I know it's stupid to cry over someone you never met, but this is really affecting me.
Top

apocalypse wrote:Have there been any reactions from Waters or Mason yet?

Not to my knowledge, I have been looking. Thought they would have said something somewhere by now. Although the family have requested privacy so perhaps they have interpreted that as keep the whole Floyd thing out of it for now thank you very much. But that didn't stop Gilmour. Perhaps their tributes are forthcoming.
Top

Charade I am
Judge!

I still can't believe it. You can feel Gilmour's pain when you read his letter. I wonder how Roger is feeling. It's very sad. Just a couple of days ago I was making a list of artists I still have to see live, and in top of the list was David Gilmour/Richard Wright. Now I just feel that a reunion doesn't make sense anymore. Pink Floyd is not Pink Floyd without Richard Wright. With Gilmour and Wright, at least I felt that I was listening to the essential Floyd: guitar and keyboard/organ.....what now? :S
Top

What David said was indeed well said. It will be trickier for Roger perhaps but he's good with words so I'm sure he'll be able to say something appropriate.


Ironic isn't it that:

Syd - mythological creative spark and hero to many

Nick - always present heart and soul of the band

And yet it is the quiet one sitting at the back, who barely appears on some albums... who spells the true end of Pink Floyd as we knew it.

I bet he'd hate to think of that but it's the truth, and it's the biggest irony of the whole Floyd mythology, simple as that.
Top

Have there been any reactions from Waters or Mason yet?

At http://www.rogerwaters.com they have replaced the pic of the moon and satellite with a whole bunch of candles.
Top

One Of These Bricks
Axe

fatoldbob wrote:Damn. That got my crying again. I thought I was done with that. I know it's stupid to cry over someone you never met, but this is really affecting me.

it's not stupid mate, i feel like crying the whole day...can't work...
Top

fatoldbob wrote:Damn. That got my crying again. I thought I was done with that. I know it's stupid to cry over someone you never met, but this is really affecting me.

Same, i cant seem to cope! I really am devertsated!!!

Im just waiting for a fan to say something stupid like.. cant wait for the tribute concert
Top

I thought it nice to put a tribute on the Floyd website. I took a screen capture of it... 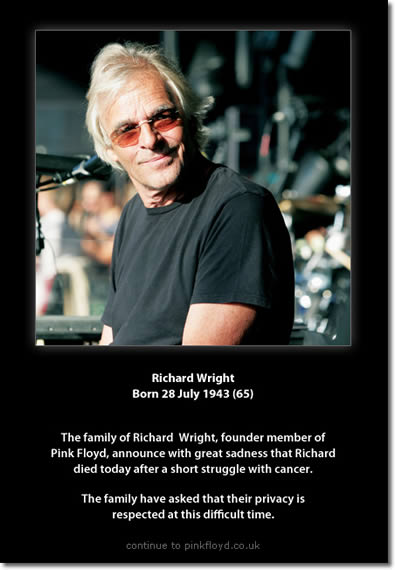