Hipgnosis: For The Love of Vinyl - London Exhibition

Talk about other Floyd related musicians here.
1 post • Page 1 of 1

Hipgnosis: For The Love of Vinyl - London Exhibition

The Albert Studio Gallery launches its latest exhibition on Wednesday 18th November with Hipgnosis: For The Love of Vinyl, a celebration of the acclaimed design work of Storm Thorgerson and Aubrey Powell as commissioned by renowned musicians and bands of 1970’s such as Pink Floyd, Led Zeppelin, Paul McCartney, Genesis, Black Sabbath, Yes, UFO, Peter Gabriel and 10cc. The exhibition will feature 20 silkscreen prints of iconic Vinyl covers, all available to purchase from the gallery - the perfect Christmas gift for every art or music lover on your shopping list.

The British photodesign group Hipgnosis gained international acclaim in 1973 with their famed cover design for Pink Floyd's The Dark Side of the Moon, widely hailed as one of the best album covers of all time. Surprisingly, Hipgnosis did not have a set fee for designing an album cover but instead asked the artists to "pay what they thought it was worth", a policy that according to Thorgerson only occasionally backfired. Powell concurs with ‘ we put the work first in the belief that success would come along later. Luckily, it seemed to work ‘.

Hipgnosis' approach to album design was strongly photography-oriented, and they pioneered the use of many innovative visual and packaging techniques. Thorgerson & Powell's surreal, elaborately manipulated photos – which utilised darkroom tricks, multiple exposures, airbrush retouching, and mechanical cut-and-paste techniques - were a film-based forerunner for what would later be called photoshopping.

Hipgnosis take this opportunity to present their new book “ For The Love of Vinyl “, the definitive history of Hipgnosis’ work. A signing and Q and A session will accompany viewing on opening night.

Do not miss the chance to see this partnership of art and music and look out for special events throughout the run of the show from 18th November 2009 to 18th January 2010.

Gallery opening hours during the exhibition are from 11am to 7pm daily, and viewing by appointment can be arranged upon request.

One Albert Studios is a Fine Art and Photographic Boutique Gallery hidden away in a magical part of Battersea. Situated only ten minutes walk from the King's Road, Chelsea, next to Battersea Park, 1 Albert Studios offers a unique location combined with a range of carefully chosen and sourced images that you won't see in a more mainstream establishment. 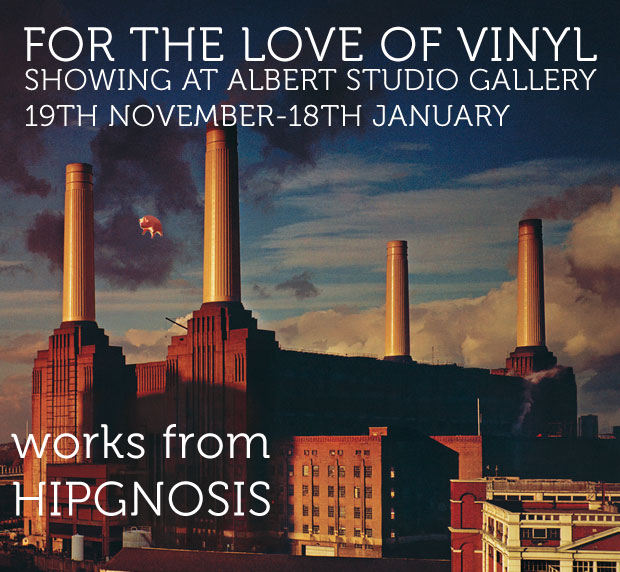