This thread is to discuss Pink Floyds Works. 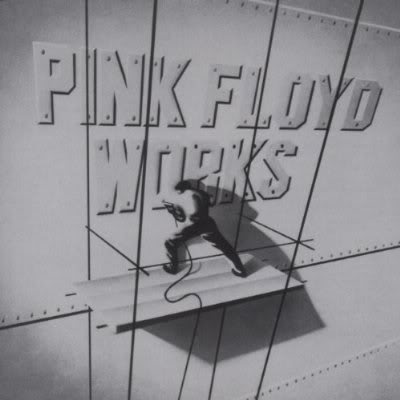 Kind of a weird mish-mash of stuff...seems pretty random actually. When this first came out on vinyl I bought it simply for Embryo, of course.
Top

Massed Gadgets wrote:Kind of a weird mish-mash of stuff...seems pretty random actually. When this first came out on vinyl I bought it simply for Embryo, of course.

OK as a Capitol era compilation, but I only own it for Embryo.
Top

Probably they ( Capitol ?) wanted a record, so ROGER decided which songs would fit in. Another credit and money-making album FOR Roger !
Top

While I'm in the process of finishing my Floyd collection, I came across this album online recently. I would only want it for the track, "Embryo". I was wondering, was this ever RE-mastered? Was this only made in the US?
Top

Probably they ( Capitol ?) wanted a record, so ROGER decided which songs would fit in. Another credit and money-making album FOR Roger

I dont think Roger takes much if any interest in these compilations
Great Dance Songs, which came out near the same time, was mostly Daves decisions (or so I recall) while Roger was busy writing new concept albums Dave wasnt interested in
and Works is mostly psychedelic era material which Roger is doubly uninterested in ... I doubt he offered any input at all to the song selection

the inclusion of Embryo is obvious, regardless of who wrote it: its an obscurity that could incite completists to buy an album they otherwise didnt need
though I suppose they could have also included Point Me at the Sky by the same logic and Dave wouldve got half a credit

It's my understanding that this was a Capitol release, with absolute no input from the band, trying to capitalize on the recent ABITW2 radio hit, which wasn't released by them but by Columbia (god bless them for the quite great 1997 remasters). So all they got to Work was the early material, from Piper to Dark Side, a pretty interesting period and "theme" for a Pink Floyd comp if you ask me, but they totally wasted that oportunity. The song selection was bizarre to say the least. I guess they were trying to make PF appear as a singles band, with the inclusion of they early singles and Free Four and selecting Brain Damage/Eclipse and Fearless maybe thinking that they were singalong tunes too. But on the other side they threw in the most experimental track in the entire PF catalog, and some of the spacey stuff too. So really the rationale behind the song selection comes as a total mistery to me.

Still I have a soft spot for it; as a young dude interested in PF after watching PULSE, buying and listening to this compilation totally messed with my head and expectations! All I thought was "WTF!? Several Species of Furry Animals? WTF is that!? The happy chanting, clapping and raunchy guitar of One Two Free Four? Those 60 Beatlesque songs about transvesties and girls playing with gawns? This can't be the same band from PULSE!" So in a way, although I really felt ripped off, it lead me into wanting to investigate more about that strange band, and many years later here I am still talking about them, and wishing I hadn't returned "Works" to the store were I bought it, a week later, with the weak excuse that I had bought it as a gift for a girl but she hadn't liked it.

But there's some interesting mixes in this comp too: a stereo reduction of the quad mix of Brain Damage and Eclipse, the "special" DSOTM version of One of These Days, and all those crossfades and segues from song to song that the people that made "Echoes" bragged so much about 20 year later, late. And those actually work better here. And of course Embryo, that alone makes this comp absolutely more essential than the mammoth of "Echoes", not better, but more essential, from a collector viewpoint.
Last edited by danielcaux on Thu May 05, 2011 9:38 pm, edited 1 time in total.
Top

It's very hard to know who this appeals to. The fans will have had the albums anyway and would only be buying this for Embryo. Regular punters who might have bought Dark Side of the Moon could well have found themselves listening to this and going WTF

You couldn't call it a quasi greatest hits collection because it's missing many of the better known or accessible tracks off the albums that Capital had the rights to. Odd and not crucial. Unless you like the mildly diverting segues
Top

And the cover is sooooo 80s! It looks like one of those cheap airbrushed paintings. Still, way better than future Roger Waters covers from the same period. It would have kind of fitted in a New Wave album from the era.
Top

Song "One of These Days " is very nice

Like A Collection Of Great Dance Songs, the tracklist is rather random, but hey it gives us some rarities and is kind of unusual.
Top

I agree with other reviewers: the only reason to own this is for "Embryo," which cannot be found anywhere else.

Apparently it was recorded during the UMMAGUMMA sessions, but left off since it featured the entire band. A pity. I know there are great bootlegged versions of this song - it was turned into a long epic live - and I love those versions - but I still love this version as well. I love the background voice also - it so reminds me of Sigur Ros. It's one of their great pre-DSOTM classics, and a under-rated one at that.
Top

Embryo really is all that, and then some!

I love how bizarre the song selection on here is. If I weren't such a full-album die-hard, I could totally envision myself saying to a friend, "oh, you're interested in getting to know earlier Pink Floyd material? well, here ya go, heh heh heh..."
Top

I'm not really into compilation albums, and this one is no exception. It's only worth listening to for "Embryo". I know a lot of people don't like how this version of the track is done, but I really enjoy it.
Top
24 posts