its a pretty good album if you ask me. Yeah they should have added more of Pink Floyds great singles but I still love the album. It is very trippy and fun to listen too.

I just bought this on vinyl at a flea market last week! It wasn't the cover I was looking for but that's ok. I really wanted Nick's pen and ink drawing but I got the one with the crazy tongue wagging faces. The best song in this collection has to be Biding My Time, just because it dosen't appear anywhere else.
Top

Steph22 wrote:I just bought this on vinyl at a flea market last week! It wasn't the cover I was looking for but that's ok. I really wanted Nick's pen and ink drawing but I got the one with the crazy tongue wagging faces. The best song in this collection has to be Biding My Time, just because it dosen't appear anywhere else.

the end of Interstellar Overdrive is different than on PATGOD also.
Top

apple wrote:My dream - Representative Relics Revisited Remastered 7CD Box with a book with all known recording dates plus dates of release in England and sleeve pictures from all Relics editions, singles plus A Nice Pair. Not sure about the track order yet. If they don't do it, I will (just for myself of course). Chronological or with respect to the kind of music so that it gets nicely together and gives a nice psychedelic listening? Any suggestions?

I think this is an interesting idea, although I would approach it differently.
You have the original Relics which I would leave in place. There are also a handful of tracks that could be added to disk 1 to create an extended version: There are a number of tracks on your list that I believe belong on Disk 3 of an Extended Version of ASOS that is modeled after Piper. I would keep the Zabriskie Point tracks separate (and in fact there are still a number of unreleased outtakes). However, there are some More outtakes that could be released either here or (preferably) in an extended version of that album.

The Man and The Journey from Concertgebouw could easily be released by itself as a single CD.
Top

Was "Embryo" on Works different from the "Picnic" version? I thought they were identical.... (Unlike the two different versions of "Pigs On The Wing 1 & 2".)

Yeah, I agree - the Complete Concertgebouw has some garbage that can easily be trimmed. A German woman giving a long introduction (which is apparently hilarious??), and of course "Teatime", which is essentially three minutes of dead air with audience noise now and then.
Top

for some zany reason I always assumed the introduction was in Dutch, but I speak neither language so it could be anything
that said, I like those sorts of introductions, they add context ... the bands not just performing for any audience, they were performing for specific people in a specific part of the world who speak a specific language

TheLazenby wrote:Was "Embryo" on Works different from the "Picnic" version? I thought they were identical.... (Unlike the two different versions of "Pigs On The Wing 1 & 2".)

They are the same. Picnic was difficult to find in the US however.


TheLazenby wrote: Yeah, I agree - the Complete Concertgebouw has some garbage that can easily be trimmed. A German woman giving a long introduction (which is apparently hilarious??), and of course "Teatime", which is essentially three minutes of dead air with audience noise now and then.

The intro is in Dutch and to me it is actually part of the performance. I wouldn't cut it. The entire concert is around 82 minutes and the 2 minutes can be reclaimed from Teatime.
Top

I love this album because of the songs on most of the album are pretty neat and different from other rock bands that were big that time. It may be a bit random but I love songs like See Emily Play, and Careful With That Axe, Eugene.
Top

... or else Relics was my 5th ever Floyd album , I really havent a clue

this compilation may seem pointless to people now, but in the preInternet days it included a lot of tracks unavailable elsewhere
in fact other than the much more pointless Masters of Rock it was the only Floyd compilation

aside from Biding My Time and the five singles sides, the tracks from the first 3 albums were the only things available elsewhere, and I have a theory...
if you go looking for the vinyl today you will discover those first three albums the hardest to find
I suspect they went in and out of print, especially in the early years when the Floyd werent such big sellers, especially in North America
so upon its release, in a few markets, that may have been the only place to get these tracks too

why did they pick less obvious choices from Piper and Saucerful?
again my theory: Ummagumma is not so hard to find, indeed some sources claim it was their best seller prior to Dark Side ... and the more obvious tracks already appeared on Ummagumma


but from my point of view, once my collection fleshed itself out, it was missing some crucial tracks
finally a budget priced vinyl bootleg called Dark Side of the Moo provided me with all those other tracks Relics should have had but didnt
Top

snifferdog wrote:It's a slightly odd compilation - there doesn't appear to be any logic to what was included and what wasn't.

I think the concept behind Relics, as a compilation, was to put out kind of a "best of" album from their early period, 67-69. A period where the Floyd was not only an album oriented band but also single oriented.

I was listening tho this the other day and was surprised at how well it flows from song tho song, almost for the whole album.

From a completist point of view of course most of us would have prefered this album to include all their early non album material, mainly all the singles and their B-sides (like that Early Days disc from Shine On, basically), but the thing is that that wasn't the point of Relics. It was an anthology of their early days, and that's why we don't have things like Point Me At The Sky or It Would Be So Nice, because honestly those songs totally suck, they are not representative of their best work. One is Wright trying to write a second rate Kinks knock-off and the other is Waters trying to do a pathetic Lucy In The Sky With Diamonds rip off.

That said, as and anthology this album also have its share of "WTF?" song choices. Well, actually for me it's mostly one song choice only that doesn't make sense at all: The Nile Song. So why was this song included? It's no secret that most of us hate that song, but we have to remember that this song was actually a semi-successful single in Europe back in 1969, so it made sense for the band/label to include it back then, since by 1971, when Relics was released, the band hadn't actually found their "definitive" sound, so The Nile Song was just one of the musical directions they had recently explored in the past and could possible come back later in the future, and not the oddity that we all now know it is (although they DID come later to that sound in songs like The Gold Is In The..., Free Four and most famously the awful Young Lust, which I even think Waters actually considers it a parody of The Nile Song's cock rock sound). 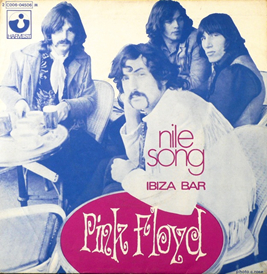 Other than that all other songs selections make complete sense to me. At the beginning the album showcases the early Syd Barrett sound, with the inclusion of his two best singles (remember, Apples & Oranges was a flop) and their quintessential early live song: Interstellar Overdrive. Then we see the band's best attempts at sounding like Barrett, in almost chronological order: Remember A Day, Paintbox and Julia Dream. After that Relics shows us how the band finally finds a distinctive sound, not so Barrett influenced: enter the space rock phase with CWTAE and Cirrus Minor. The latter song is a nice bridge between the acoustic and folky sounds of Julia Dream and the more adventurous ambient electronic sounds of their space rock songs. I would have included STCFTHOTS here too though, but I guess it was a problem of running time, and if forced to choose just one of their space rock highlights, is better to have the non album CWTAE here.

So far Relics has a nice flow and nicely shows us how the band's sound evolved in the early days. But then The Nile Song hit us, and the song kinda destroys the nice flow the album had been creating so far. Let's forget about it though. At the end they throw the fans a bone, an unreleased track, in the form of Biding My Time, the only song exclusive to The Man & The Journey that was ever recorded in the studio. Although it doesn't sound like anything else preceding it, the song is pretty good; it shows another side of the group: Floyd as a blues rock band. Gilmours rips it pretty hard on this one. I would have use this song as the album closer though, as it has that epic finale thing going on it, and would have not included Bike on this compilation, because despite being a good song, it feels out of place here, after the whole "evolving journey" thing. But perhaps they included that one to pump up Syd's royality check.

So this is kind of what my perfect Relics anthology would have looked:

That would flow pretty nicely and would be a good mix between a "best of" and an overview on the evolution of their early sound.


Now on the topic of Biding My Time... what's story behind that recording session? Why the band chose to record that song? It was intended as a single? Another album project? The complete Man & The Journey perhaps?
Top

Well, I always had a soft spot for this album. After the Wall and Dark Side, I borrowed this album and became a fan. I think CarefulAxe hooked me and I explored older albums.

I would really love an Immersion version without any album tracks covering 1965-1972, including dvds.
Top

nosaj wrote:Well, I always had a soft spot for this album. After the Wall and Dark Side, I borrowed this album and became a fan. I think CarefulAxe hooked me and I explored older albums.

I would really love an Immersion version without any album tracks covering 1965-1972, including dvds.

THis just should have been the first five singles and Bidding My Time. I love every cut but it just seems like a missed opertunity to get the catalog more tidy.
Top

I do enjoy this collection better then most other best of Floyd albums. I also enjoy the Mason cover. Sweet stuff. Rated 4 from me.
Top

The sentiment of it being my second Pink Floyd album forces it to a full five!
Top

To me, Relics was a huge waste of potential. Instead of having any album tracks at all, it should have been all non-album singles, like The Beatles' Past Masters. As it stands, it only has a few essential tracks and too many repeats.
Top
31 posts