This thread is to discuss David Gilmour Live in Gdansk and is linked to from the Pink Floyd Discography section. 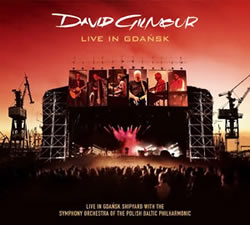 I received the 2 CD / 2 DVD version for Christmas. I will say that the second CD is extremely good, a definite improvement over Gilmour's last two live albums (PULSE and Delicate Sound of Thunder), but I have yet to get to the rest of the album so far...
Top

The second disc is much better than PULSE, i love it. I didn't listen to the first one because i was not too interested in listening to OAI live. Take A Breath destroys in a terrible way that album.
Last edited by Eclipse on Tue Dec 30, 2008 8:28 pm, edited 1 time in total.
Top

I like this a lot but more for the Pink Floyd songs than for On An Island. The songs sound great though I'd have been interested in hearing them with the orchestra a bit higher in the mix. It's also a fitting memorial to the talents of Rick Wright.

Top track has to be Echoes.

Ah yes, sniffa sure does have...uh, yes the PF tunes are really quite nice. I have the 5 disc set, which has risen by $40.00 CDA at stores around town recently.

I'm not a fan of the OAI stuff.
Top

Hogtown wrote: sniffa sure does have...uh

You speak from your own expirience?
Is there something you would like to share with us, Jay-son?
Top

So do you guys prefer this or his acoustic show?
Top

The acoustic show had some great moments, but mainly all of them were a bit more electric then the rest of the acoustic show Dave put on.
Comf. numb and Breakthrough to be exact. He used his gretsch on these songs and that was Gilmour I admire.
Dunno, I prefer his full band electric show. Couple of acoustic songs is allright, but not most of the gig.
His recent tour was a nice balance between that.
Top

I really like the acoustic show, and how he had to rearrange some of the songs to fit the concept (esp the Shine On reprise), and the oddball covers he performed
the MeltDown DVD was the 1st time I really regained respect for him since he gave us the Fair Forgery tour in 87, when I saw it I decided that sort of mellow musicianly thing is what he should have been doing all along
the OAI live repetoir played it a little more safe, though its still interesting to see him switching instruments 2 or 3 times per song
in both cases I like the emphasis on what the musicians are doing as opposed to what the giant robotic props were doing back in the stadium days
Top

Bought the 2CD/1DVD set when it first came out, and I have listened to it exactly once (plus watched the DVD once).

It is okay, good sound mix and nicely shot concert footage, but nothing really special. For anyone who saw Gilmour on this tour, I guess it is a nice souvenier. Otherwise for complete-ists only.

It is probably better than "Remember That Night", but then again it is hard to know for sure, as I have only watched that once too.

I purchased the five disc, deluxe set and I listen to, and watch, this quite regularly. Reading through people's posts on this board it seems I am in a very small minority of those who actually enjoy On An Island, so I do enjoy the first disc as the album comes alive in a very nice way when performed in front of an audience.

As I have ROIO's of every show on this tour save for one, it is really nice to have this set in all its audio glory. It's also nice to have all of the bonus songs in one set. The rarities such as A Great Day For Freedom, another song I like as I am an admitted Division Bell fan. This was a fun tour, with surprises popping up here and there and it was so cool to see Dave revisit past songs from my favorite Floyd era, such as Fat Old Sun, Echoes, and Astronomy Domine. I also really enjoy the treatment he gave the Syd songs, although it's not here, Dark Globe is a wonderful tribute, and Dominoes and Wots... Uh The Deal {Bonus Content} are beautifully played.

Overall I feel this is one of those essential releases, for starters the music here is quite good, be it solo or from the Floyd catalog, and it is also the final tour that Richard Wright took part in. As I feel the five star rating is just too limited, I would give this a solid 9 out of 10.

I find it rather peculiar that on a Pink Floyd forum so many people dislike so much of the recorded output by the band and their solo efforts. It seems as though many people only really like two albums, and some haven't cared for anything that's been released since 1973. LOL

Being a musician I know I have a wide spectrum of music that I enjoy. Perhaps it's just because I understand the subtleties and what goes into it. People that only listen to On An Island to go to sleep to or only listen to certain albums once are, I feel, really missing out. I've loved Pink Floyd, and the respective solo efforts of Roger, Dave and Rick, for over 30 years. Perhaps I give them more leniency than some... but good music is good music.

One of the most special qualities of Floyd is that their music can encompass so many varying styles. From spacey psychedelia {Echoes - Set The Controls - Embryo} to bluesy {What Do You Want From Me - Sexual Revolution - Shine On I-V} to acoustic {Green Is The Colour - Wish You Were Here - Wot's... Uh The Deal} to gentle and soothing {Breath/Reprise - A Pillow Of Winds - The Blue} to angry {Pigs (Three Different Ones) - What God Wants Part I - Dogs} to epic {Comfortably Numb - Time - On The Turning Away} to intense {Welcome To The Machine - Amused To Death - High Hopes}... they cover it all and that is why I still value their music after so many years.
Top

506am wrote:Perhaps I give them more leniency than some... but good music is good music.

Yes, and bad music is bad music. But how can someone tell the difference? At the end is just a matter of how low or high you set your own quality threshold.
Top

506am wrote:I find it rather peculiar that on a Pink Floyd forum so many people dislike so much of the recorded output by the band and their solo efforts. It seems as though many people only really like two albums, and some haven't cared for anything that's been released since 1973. LOL


I like everything from 67-83. I think Waters 3 main solo albums are alright. The songs I like on those discs - I really like. I dislike The Tide Is Turning. I also didn't like Leaving Beirut.

Gilmour's first 2 solo albums are okay. A couple of great songs. There's no way out of here and Murder. I've never heard On An Island. I have no interest. I've seen Gdansk. Whatever. Sounds like the same old shit to me and I listen closely.

Rick Wright solo albums do not hit the spot for me.

AMLOR sucks and Division Bell has one song that actually made me feel something even though some of the lyrics were awkward. High Hopes.

That pretty much sums it up for me. I'm a real fan. 15 years of quality music is more than most bands can produce. I don't need to hear every new live disc Gilmour or Waters throw out there. It's such easy money for them. Sitting up there playing Dominoes or Brain Damage for the millionth time.. I'm jealous. I have to work for a living.
Top

506am wrote: I find it rather peculiar that on a Pink Floyd forum so many people dislike so much of the recorded output by the band and their solo efforts. It seems as though many people only really like two albums, and some haven't cared for anything that's been released since 1973. LOL

Im with you, part of the reason I joined this forum was to defend some of the music that seems to be bashed so often. AMLOR is a good record with some decent songs, it was a transition and it was the 80's. The Division Bell is a great album which I still enjoy listening to to this day.
Top
44 posts