This thread is to discuss Pink Floyd's Wish You Were Here and is linked to from the Pink Floyd Discography section. 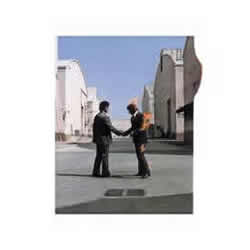 This was the first time I'd been disappointed by Pink Floyd and I still feel the same way about the album today. I bought it on its release date and went straight home to listen to it with a friend of mine who was also a Floyd fan. The only track I was familiar with was Shine On 1-5 from hearing it on the radio so I was expecting great things from the rest of it, being a bit hyper on Floyd at this time. When we had listened to it we both felt that it was a huge let down and that there was something missing, apart from Shine On of course. I've listened to it again of course but there's nothing in it that grabs me and I'd say that chronologically speaking Shine On was where my interest in Floyd came to a sudden stop, only partially revived by sections of The Wall, although I didn't listen to that until about 15 years after it was released. I voted it a 2.
Top

I think it was '82 or '83before I heard anything off of the album. By this time, I knew that PF had more albums that just The Wall and DSOTM, but like with UmmaGumma, Animals and the others, I'd seen the cover in the stores but didn't recognize any of the song titles.

During that time, the coolest radio station in town (in my humble yet outspoken opinion,) played The Police followed by Ozzy followed by Prince...you never knew what you were going to hear next. I liked that about it.

I first heard both Have A Cigar and Wish You Were Here on that station. The DJ (who was the same pre-recorded, but still friendly voice pretty much 24/7,) had identified Wish You Were Here by title and artist at song's end (though I think I'd reasoned it out for myself by then,) but only said "That was Pink Floyd" after HAC.

So now, I'm looking for a song called "Riding The Gravy Train" or "Gravy Train" and of course, it doesn't exist. It wasn't until about '86 that the older brother of a friend of mine informed me of the title of the song.

I picked up a copy on a Speech Team overnight event and listened to it the night before the meet on my walkman. Being as I was in a room with three other guys, when I heard the chuckle on SOYCD, I thought it was one of the guys. *shrug*

I think highly enough of HAC that if one were to put a gun to my head, I'd name it as my all-time favorite single Pink Floyd song.

I think the rest of the album is good...but between it's near omnipresence on Classic Rock radio and all it's official live permutations, I really don't care if I ever hear the title track again or not.

It's like "House Of The Rising Smoke On The Stairway To Freebird*." It's one of the first things nearly anyone with a guitar learns and even if they're playing it correctly, I'm still like "dude...that band has other songs, you know."

Along with Dark Side and Animals, this is my joint favourite Pink Floyd album. However, I have always found it a shame how overplayed the title track and Shine On is. They are masterpieces, but so are Have a Cigar and Welcome to the Machine, which are both too often ignored.

Despite being the second Pink Floyd album I ever heard, it took me a long time to get into, but I became obsessed when I finally connected with it.

It is a very cold album, but Shine On and Welcome to the Machine are masterpieces and I have always loved the graphics and design of the package associated with the release of this LP.
Top

This was the first album I actually picked up on i'ts release date. Best album ever, Bar none!
a brilliant mix of songs and special effects.
Top

I tend to agree that SoYcD and WYWH have been played to death. However, I still listen to both of them quite often. The rest of the album is perhaps even better than those two tracks. Definitely a five in my book...
Top

WYWH is better than DSOTM, because it's not overproduced.
Top

This has been my favorite album for a long time. It is the most moving piece of music i've ever listened to.

Shine On You Crazy Diamond (all parts): What to say? This is as high as perfection can be accomplished in music IMO. All of its movements manage to be beautiful in their own way, even the heavier ones.
Welcome to the Machine: Beautiful. Guitar and synths used in such a inspired way.
Have a Cigar: Hah another highlight. I liked the fact they used Roy's vocals here.
WYWH: This is how an acoustic song should be made!!! It still moves me after listening to it like dozens of times.

I can't explain, really. I think this album tops all the other PF ones and it is in a much higher patamar as my second favorite one...
Top

this is my favorite album of all time. one thing that i've always found interesting is that it was released with two different covers. i didn't realize it for years, but then one day i was playing the album while looking at the cover and then i looked up to the wywh poster that i had on my wall and i realized that the two pictures were not the same. i wonder why they did that.

I re-discovered this album a few days ago, after a long period of ignoring Pink Floyd because I'd burnt out on them. I used to think it was second only to Animals, but I'm starting to think that it is even better, because I'm finally beginning to appreciate just how good Have a Cigar is (I used to despise it). It is very coherent, focused and well composed throughout, and the input from each band member is superb. In particular, the increased prominence of Rick Wright's synthesisers (especially on Welcome to the Machine) makes this one more interesting to me than Dark Side of the Moon. The title track suffers from overplay, but it is still a well written piece of music that doesn't really seem to me as if it can be improved. The lyrics of Roger Waters improved even upon DSOTM for this record, and the guitar parts are, arguably, the definitive examples of Gilmour's style.

There is so much more to say about this album, but I'm sure that most people on here have heard it enough times to know just how good it is, so I'll stop writing about it now.

Shine on would be enough to give it a 5, and there are other pieces too.
Top

to me, this is the best one

I voted with a 5 on this one, I love this record. With DSOTM, Echoes, Animals and pieces from TW, this album represents the best Pink Floyd to me.

It's interesting to notice that when I first listened to it I reacted exactly in the opposite way as Stephen (post #3) had. What I find interesting is the fact that, all being "Floyd lovers" as we are, the same music can impact on us in very different ways. I like to note that the same art creation (music, a painting, etc.) can represent very different things to anyone of us. Art reassures our own sense of individual independent beings.

I listen to a lot of music, and it's very hard for a record to "shock" me in its entirety after a full first listen. Well, this album did exactly that!! It flowed to my ears in such a way that I could never forget that moment, I recall now (20 years later) (I'm 35) where I was listening to it, and what was my reaction.

Great record. Taken as a whole, the best of Floyd ever.
Top
121 posts