This thread is to discuss Roger Waters' The Wall Live in Berlin 1990 and is linked to from the Pink Floyd Discography section. 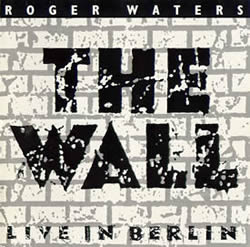 I felt it was overbloated nonsense where any intimacy the tracks could have had was lost through all the pomp and production. It sounded far too celebrationary when the studio album is often dark and grim and and some of the guest choices have dated fairly badly. Oh, and The Trial sequence is fairly embarassing. Still, the quality of the song writing saves it from being unlistenable, i mean a lot of the tracks are quite hard to really mess up, just its not a patch on Is There Anybody Out There
Top

...this is what happens to the Floyd material without Gilmour and Wright.

Good, but not great. Definitely a period piece. The video recording makes it far more interesting with a greater impact on your senses.
Top

My article "One Of His Bad Days" says all I feel need be said about it.

But i've never seen this picture of Roger on his knees praying that you talk of...
Top

That article states exactly my feelings about this album. For something that you thought could not have gone wrong, it did not turn out especially great. I have a DVD and 2xCD version of it and would never consider listening without the video, if I ever decided to pull it out again. As stated in the article, the main problem to me seems to be a poor choice of cast (Bryan Adams??? James Galway the classical flautist playing about 10 notes??? Cyndi Lauper??? Sinead O'Connor??? wtf?)
Top

I gave it a 2 since it's not all that crap after all.

I agree that the choice of cast was very poor but you shouldn't forget the fact that Bryan Adams, Cyndi Lauper and Sinead O'Connor were at the peak of their careers around 1990 and they were something like superstars back then. It would be just like Waters calling Rihanna to sing "Mother" these days. The fact that she sucks doesn't change the fact that she's popular, just like all of those above were 19 years ago.
Top

Point well-made...but what you're missing is the fact that when these people were announced, it was on the heels of Waters saying that it would be a cast of "LIVING LEGENDS" joining him.

Even at the (seriously brief) height of their (questionable) fame, The Hooters were NOT considered LIVING LEGENDS and are certainly not remembered as such now.

David...if you have the Berlin DVD, the photo is actually shown on the screen as Waters talks about the moment.

I can't seem to find a photo of it online right now. *shrug*
Top

I'm sure you're right to be critical of it, but it's difficult to do so if you were there at the time.

mosespa wrote:David...if you have the Berlin DVD, the photo is actually shown on the screen as Waters talks about the moment.

Ah, means i may be putting that disc on for the second time since i got it years ago
Top

the parts with the guests are tuly horrible, but when its Waters and the band, there are some gems. Best versions of Don´t leave me know until the end of Goodbye Cruel World. Nobody Home is just beautiful.
Top

The guests killed the atmosphere of the album.

Bryan Adams is ok for the songs he's performing.
But Cindy Lauper behaving like an ageing lolita puppet on strings or The Band with their campfire-style singing... No.
Top

I actually think it kicks ass. The line-up's great, except The Band and Joni Mitchell (not good vocals!). Besides, it's always great to see so much famous artists love PF. The intimacy, as David says, is not ruined for me, as it IS present where needed. Some pieces really need a crowd. The decoration's great, especially when Roger sits in "a hotel room" in One Of My Turns, and when in CN he inserts a syringe into the wall

Having read the "One Of His Bad Days" article, I sadly have to agree with just about all of it. I will give "Live In Berlin 1990" a two, just because the original songs themselves were pretty good, and the spectacle of this enormous wall coming down was really impressive.

Alas, almost everything else about this CD/DVD is dreadful, and it is destined to be almost never played in my home. Now if only Roger had ditched all the so called "legends" (HA!!), and just played it with his current band, it would have been so much better. He could still have pulled in the orchestra and marching band if he wanted, but at least the show would have been more coherent and far less hideous than having the ghastly Cyndi Lauper croak her way through "Another Brick".

Worst of all, Waters barely gets to sing and play at his own show! He may as well have not even bothered to bring his Fender along with him, since it gets so rarely strapped on.

I would imagine that even Roger now looks upon this appalling fiasco as some kind of bad dream.

Whatever do do, Rog, DON'T bring it to Broadway! Just leave us with what happen memories remain from the original album and, to a lesser extent, "Is there Anybody Out there?"
Top
99 posts