This thread is to discuss Syd Barrett - Barrett Album and is linked to from the Pink Floyd Discography section. 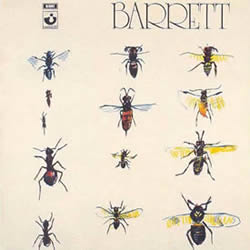 Interesting, but not quite my cup of tea. I strongly question his state of mind at the time of the recording.
Top

This is truly a wonderful album. 5/5
Top

I give it a 3/5 I really enjoy it. But I still like Madcap more. Actually, maybe this deserves a 4/5. It depends on my mood, I suppose. Maisie is such a sweet song. Is he like coughing halfway through it? Because whatever it is it sounds incredibly adorable.
Top

Real Pink in the Inside wrote:I strongly question his state of mind at the time of the recording.

That's what makes it so fascinating for me, his mind is laid completely bare for all to see. I gave it a 4.
Top

I think it has a more focused sound than The Madcap Laughs, but the songwriting is not quite as good. I also miss Soft Machine's backing, but that is a minor quibble that the addition of Rick Wright makes up for somewhat. Another 4/5 from me, for being the second-best Pink Floyd solo album after The Madcap Laughs.
Top

Batter than madcap - more together
Top

Baby Lemonade : Great opener with very mysterious lyrics. Make your name like a ghost . Why is there an army of clowns outside? Who knows. Good tune!

Love Song : Would this song be better or worse with Ratledge instead of Wright?

Dominoes : The day goes by. Indeed. Not a favorite but it's still real good. Backward guitar is hypnotic.

It is Obvious : Love it. It IS found on another plane. It's lost there, too.

Rats : Probably real big, hungry ones by the sound of it. The band can just barely hang on as they play one chord for 3 minutes.

Gigilo Aunt : It sucks when the dust is in your way and you are grooving on down in a knapsack. Syd seems to be making the best of it, though. This song is a Rock Classic, goddamn it! Right up there with the next one...

Waving my arms / I never lied : This song is so good I can't ever get over it. You shouldn't try to be what you can't be. Syd, spitting out the knowledge. This song makes me high on the air.

Wined and Dined : What a great follow up to 2 of my favorite songs on the album. Syd starts getting serious with Waving my arms and this one. Before that it was all parties of clowns and everything was rosy (well...other than Rats!). Now the emotion is spilling out and I'm feeling it. Just last summer...it's not so long. This is where Syd breaks my heart.

Wolfpack : Back to the madness. In formation. Waters learned how to sing from this track.

Like some of it a lot (Love Song is probably my favourite track of it, but i think the entire first half is excellent) but loses momentum with the second half a little (though do like Waving My Arms in the Air). Read the book Crazy Diamond, a biography of Syd, and found the making of process really interesting hearing about how his state of mind influenced the final product, and as with Madcap Laughs it's kind of difficult to take the history of the album away from it. It means it makes for a very interesting listen even if i vastly prefer the much more raw Madcap Laughs
Top

I like this album because I'm a Syd fan but, to me, it sounds like the recordings of someone who would really rather not be there.
Top

I listen to this on rainy days. I love it.
Effervescing Elephant is always a fun one to just start randomly saying in the middle of a boring class.
Top

I like this album in the spring and early summer...so, I will be lsitening to it a fair amount in a month or two.
Top

I don't like any of Barrett's music. I find it silly and very Immature. I've tried to get into his music but I can't. I decline to vote.
Top

oldhippy wrote:I don't like any of Barrett's music. I find it silly and very Immature. I've tried to get into his music but I can't. I decline to vote.