This thread is to discuss Pink Floyd's Relics album and is linked to from the Pink Floyd Discography section. 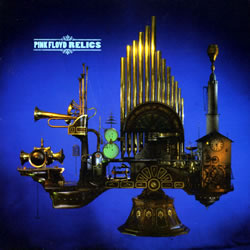 Its a good album but I think a few more early singles would have been good, maybe B sides as well. Not sure why two songs off More ended up on here. Cirrus Minor and The Nile Song are chalk and cheese musically, and really break up the vibe a bit.
Top

Anyway as samplers go I think it's pretty good with a nicely varied selection. I just bought that Starline version again as I exchanged my original one back in the 70's for a Yardbirds one, also on Starline ...why I don't know.

Agreed with you Stephen. Orginal LP album cover is much beter.
Some more Relics covers:

Nick drew the original cover so there's something nice about that. The other one where they made up the wonderful machine is a stronger image though.

It's a slightly odd compilation - there doesn't appear to be any logic to what was included and what wasn't. Overall though it's an interesting album and probably served as a good introduction to Pink Floyd at the time.
Top

...I have nice memories with this one.
My ex girlfriend bought me that cd when we were together in Barcelona some 12 years ago...
...ahhh... the night before that was ....let's just say awesome.

I have the copy that Nick Mason drew (The white pencil-like etching). Another great cover!!Did they EVER put out a bad one!?! All these songs are great because they were still trying to figure out what they wanted to be after they kicked Syd out of the band. Nile Song is aces!!
Top

My dream - Representative Relics Revisited Remastered 7CD Box with a book with all known recording dates plus dates of release in England and sleeve pictures from all Relics editions, singles plus A Nice Pair. Not sure about the track order yet. If they don't do it, I will (just for myself of course). Chronological or with respect to the kind of music so that it gets nicely together and gives a nice psychedelic listening? Any suggestions?

It's not a bad sideways compilation of stuff, but it would have been great from a completionists point of view if the More stuff had been dropped in favour of Point Me at the Sky and It Would Be So Nice.

The best thing about it is the artwork, which I must confess I think is quite cool.
Top

I feel that Relics never really gels together as a decent collection, but then what PF collection really does? Each of PF's albums are distinctive unto themselves, and to break them up and mash them up with songs from other PF albums seems kind of counter intuitive to me. For the most part, they were a album oriented band. Granted they had a bunch of early singles and stuff, but that's not what this is. It pulls together a few of the early singles and some early album tracks, most of which don't make much sense going together. I definitely would not have included IO (a. because I don't like this version and b. because like on PATGOD, it doesn't fit very well with the psychedelic pop tunes), and I would not have included the stuff from More (as much as I love the album), because by that point, PF were exploring new directions and new sounds that were taking them away from the more pop oriented stuff. I would have preferred a collection of all their early singles and non-album tracks than this. I think it is possible to do a good PF collection, but not one any record company would release. A good PF collection would have to focus on a certain sound or dimension of their music, such as a Pastoral Pink Floyd collection, making it kind of a concept album in it's own right, and not a greatest hits/other junk collection. Still, I gave Relics a 3 because the songs are good. I have the version on vinyl with Nick's wonderful cover, which I bought at the time mainly for the cover! I also have the cover in Keith's initial post on a T-shirt, but sadly, that T has seen better days.
Top

I miss my Japenese import gate-fold vinyl of this album...my THIRD PF album, that really got me into the band...

I think it's a decent collection and a nice representation of the music Pink Floyd did before they entered what most people would think of as their prime. When i got it i was excited by the 3 tracks there that i'd never heard before (at the time they were Painbox, Julia Dream and Biding my Time) which i could see as being a major draw for fans who don't do a whole lot of downloading. I would agree with mr Gadgets that the album never really gels (indeed, this is one of those albums you can put of shuffle and not really know was shuffled) though as a collection of songs it is certainly fairly satisfying (save for The Nile Song which shouldn't be there)
Top