I'm now thinking my memory of.hey you has come completely from seeing the VHS a few years later. (Was it televised in the UK? I may have recorded it, if memory serves!)

Memory is a weird thing!

Anyway, looking at the recorded setlists of all of the Earl's Court shows, it does appear that they played Hey You only as the first encore song, and only on the nights when DSotM was not played.
Top

I have rolled back the years and have a blinking “pulsing” red light on the bookcase once again!

All you need is a bit of patience and an AA battery !

^^^
ditto on the battery front!

How does everyone rate the different edits of Pulse

I really like the 2019 new edit its my favorite cut of Pulse, some really cool new camera angles, also the 2005 edit is really good as it shows more of the stage the 2019 mix is a good mix of stage and band members more so then the VHS and PPV edits
Top

It's been suggested that they have something to do with the "(Publius) Enigma". I remember reading they're page numbers, and the photos on the appropriate pages would contain some hints. I don't know, since my version doesn't have them

Finally! Thank you very much DarkSideFreak.

You're right, it must have something to do with the Publius Enigma riddle. It must be a page numbers. I remember when I bought the PULSE CD back at the 1995, I got with the 'Diving Man' book in. But, I wasn't initially aware of a connection between Publius Enigma, the book, and those numbers. Unfortunately, I don't have that book anymore either. 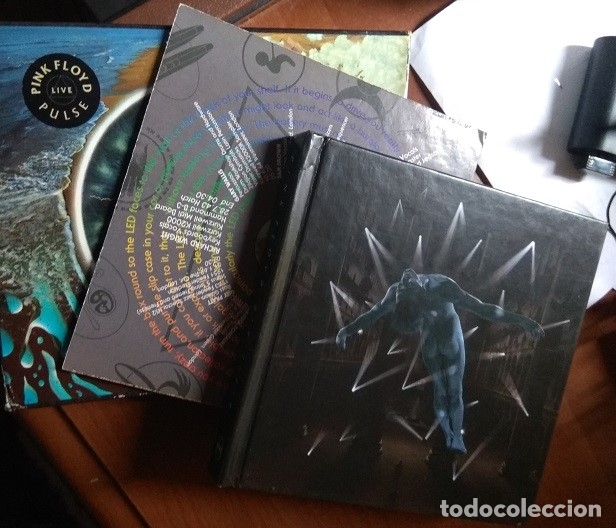 It appears that the numbers in the circle relates to the song being played in the pictures in the book. ie the track listing on the card shows High Hopes with the number 15 in a circle after it and on page 15 of the book it clearly shows the High hopes video on the screen. Its the same as learning to fly (19 & 31) and comfortably numb (44 & 45) - I haven't checked the rest out yet but those were the first 3 I looked at and they all lined up
Top

^^^
Thank you ... that'll be something to check out later when I have an hour to spare

Vote Pulse as the BEST LIVE ALBUM OF ALL TIME

Only option available for Floyd. Band of Gypsies got a bad or lukewarm reaction when released but peak Hendrix (his last year alive) is very, very tempting!
Top

Only option available for Floyd. Band of Gypsies got a bad or lukewarm reaction when released but peak Hendrix (his last year alive) is very, very tempting!

Hm... I've always been a bit lukewarm about PULSE and with such contenders as these, I really don't feel I could vote for PULSE over any of them. Thankfully there's a multi-option.

I bought Pulse to listen to during recuperation from a surgery last year, and Rogers The Wall the year before.

I prefer the former, but I've been listening to loads of the latter.

It's a good live album, but my vinyl copy was a bit on the pricy side.

I still listen to it way too much.
Top

I need that to be released on vinyl....
Top

Interesting comments from Gilmour in 1995, about plans for a Dark Side of the Moon concert or tour some years after the original tour:

"The reason for Pulse is Dark Side of the Moon, obviously. We weren't going to do a live album for this tour; it seemed a bit superfluous having just done one a few years ago. But, as we started out on the tour, we were looking for ways to change the show around and make ourselves a little more flexible and have a little fun, and Dark Side of the Moon was one of the ideas that came across. We thought, 'That'll be easy, we're already playing half the songs.' But it took us about three months to put all the bits of sound-effect tape into it, besides getting all the old film and making one or two new bits of the ones that were too ancient or damaged. So we did it on the end of our American tour, and then when we carried it over to Europe, we started thinking, 'Well, it would be nice for us - and for posterity - to have a live version of Dark Side of the Moon,' which I always particularly wanted. We, infact, discussed it years ago - even when Roger was still in the band - about putting a live version of Dark Side of the Moon back together and recording it, because we don't have a record of it ourselves. So, I thought that would be a very nice idea. Of course, discussing it, we finally thought it was daft to just put out Dark Side of the Moon - we might as well put out the whole thing."
Top
69 posts