This thread is to discuss Pink Floyds Delicate Sound Of Thunder. 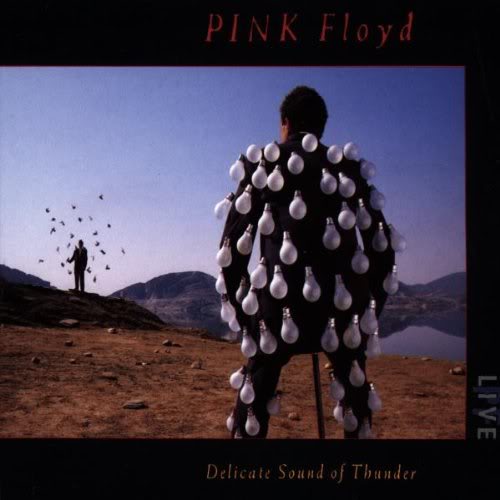 Comfortably Numb is awesome the solo is so much better then on Pulse IMO, shame its not a full setlist but overall the performance is awesome with band on top form.
Top

Ive never owned this album in any shape or form
Ive got the same issues as I do with PULSE, the performances are too sterile and too close to the studio originals to qualify as a decent live album
Ive posted further thoughts on this album (and its video counterpart) on the MLoR thread
but I did see them on this tour, two nights in a row, so the official live album release can never live up to my memories anyway

as with PULSE, I think the outofprint VHS concert video is more essential, as the thing they could give us in concert you cant get on your hifi at home is that legendary visual experience
fortunately there is a welldistributed slicklooking pirate dvd of the old VHS video currently available in respectable mainstream stores, its kind of cool to compare and contrast with the more posterity-minded PULSE
Top

I saw these shows around 5 times over the 2 legs and I don't think they changed the set at all - and they killed Money by allowing the whole band to have a solo slot during it.
Top

I used to listen to this album while jogging, so perhaps my judgement is clouded by the natural high runners get, but I have very fond memories of this album. Oh, and I also saw the band live for the first time during this tour. So there's that. I second someone else's notion that "Comfortably Numb" sounds awesome here. I love it. It's really slowed down from the original, and Gilmour's solo is breathtaking. And I love the way the band sings the verses; instead of attempting to duplicate Waters' voice, they sing in a big chorus. It really works.
Top

this probably the last testimony to Gilmour's legendary restraint on guitar. the lead work on this package is impeccable throughout. i don't know what the hell happened to him in the while before TDB but he seemingly developped an allergy to silence between notes thus splashing cheap tricks all over the place like most guitar heroes past their prime. i hold a few of his post '89 solos in high esteem (High Hope's and On an Island's are great) but most of the rest is pointless noodling, as if he got better physical aptitude (and confidence) but less inspiration.

it's been 15 years since i heard DSoT but i have fond memories of it.
Top

I think the Momentary Lapse of Reason (an album I love) material is phenomenal, better in these live incarnations actually; and I enjoy the rest too.
Top

I uploaded the uncut Comfortably Numb from DSOT on YT not that long ago have a listen if you have not heard it before. "Comfortably Numb 23rd August 1988" its more epic then Pulse's IMO
Top

jude111 wrote:I used to listen to this album while jogging

This album is way too bad, and the same opinion for their entire catalogue from 1987 to TDB and PULSE.
Top

Comfortably Numb from this album uncut

According to Wikipedia during the mixing of the album there were a few retakes.

Rick redid his vocals on Us & Them, and slightly more surprisingly they got Sam Brown in to replace Rachel Fury's vocals on Comfy Numb..
Top


As Scott Page, who played both saxophone and rhythm guitar on the tour says: "To the fans and the people that want to see it, they want to see it: it's part of the moment, right?" Having unintentionally taken the mantle of band archivist during that tour – collecting audio-visual material that chronicles not just performances but many behind-the-scenes bits that will give fans greater insight on the importance of this moment in Pink Floyd history – Page serves as a reminder of something we take for granted in today's iPhone society: live releases from any of the band's active years should not only be treasured but also expanded and re-released – and "Delicate Sound of Thunder" is no exception . (Page is on the cusp of releasing photographs and selected video footage from over a hundred hours of his own audio-visual material for fans – and even band members – to see for the first time in 25 years).

How great would it be to see Scott Page's video footage.

Let's hope he does it and doesn't seek approval from Grizog Gilmour first.
Top

Hopefully not...He doesn't need to keep in with Gilmour & Co these days anyway hoping to get more work
Top
77 posts