Thanks to Stu for sending me the video!


As part of the publicity following Pink Floyd and Roger Waters revelation that they would re-unite for a gig at Live 8 next month on 2nd July, Nick Mason (Floyd drummer) was interviewed for ITV news. You can download the video and read the transcript below. 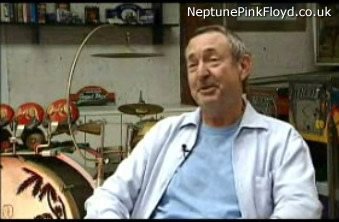 Mates: They're resisted every effort to get back together, until Bob Geldof got on the phone...

Mates: He got on the phone to you all?

Mason: Yeah. He started with David, and then he worked his way around. I think he was probably as surprised as we were!

Mates: The band have agreed to play four of their classic numbers. Which ones, we'll have to wait and see...

Mason: Hopefully they'll be fairly slow numbers, because at my advanced stage I don't want anything too fast!

Mates: What are your hopes for the day?

Mason: I think a bit like the original Live Aid - what one would like, is for it to be utterly memorable; for everyone who was there to remember it as a really important and great event.

Thanks, guys, I missed that last night... Didn't miss much, but still great to see it. I can't believe all of this is happening!!!

You were too eager to please to stop and think a moment and encode it a little higher the first time!! lol Nothing is lost!

*a big stone falls down from Bran's chest and rolls away...*

Hahaha that is hilarious. Eclipse is playing and in the corner it says "The Wall" Sony Music. Another Brick in the Wall and it says "The Dark Side of the Moon" EMI/Capitol Records.
Top

Jangus wrote:Hahaha that is hilarious. Eclipse is playing and in the corner it says "The Wall" Sony Music. Another Brick in the Wall and it says "The Dark Side of the Moon" EMI/Capitol Records.

Yeah, it is quite bad that!! I think we should find an email address at ITV.com and send 20,000 letetrs of complaints so the Independent Television Commission uphold our mass complaint!!

Awesome upload guys!
Gives us north american fans a chance to see things we wouldn't normally catch on CNN (or maybe it did??)
Thanks a lot for the vid!!!
Top

Well when i was at my Grandmas old folks home i overheard a news spot on the tele next door talking about Floyd and LIVE8, so if its on Aussie TV it should be on US TV.
Top

Yeah, they got their labels all bass ackwards.

What does Nick mean by advanced stages? Does he have arthritis or something?
Top

Could "advanced stage" actually be "advanced

Could be a mistranscription, right?
Top
19 posts