Gilmour Confirms On An Island 5.1 Mix!

Read interview | Chat about it 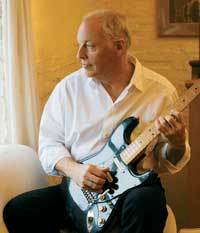 David Gilmour has confirmed in an interview that his latest album On An Island will be released in surround sound 5.1 after mixing has been completed after the summer holidays!

In the interview, with Sound and Vision Magazine, David was asked “Had you given any thought to recording the new album in surround sound?”.To which David replied:

“We did, actually. My initial intention was to release it in 5.1 at the same time as the CD, but we won’t get around to finishing the mix until the tour and the summer holiday are over. We recorded all of the drums and orchestral stuff in surround. While I do like to keep the rhythm section more or less in stereo, I tend to bring some of the more fluid things — voices, keyboard textures — around from the front to the sides for a much wider effect. You have to get a feeling for the sounds that are possible and natural enough for your brain to deal with. I don’t like to put too many instruments behind the listener.”

You can read the full interview here.

You can chat about the interview here.