Limited Copies of Inside Out Left!

There are now only 23 copies of Nick Masons Inside Out left available to buy from the limited collectors edition batch of 500. Published by Genesis Publications at a cost of £595, the box you can buy will come with all sorts of goodies in it. You can read and see more in the Brochure.

‘I bought the original Derek Taylor book (Fifty Years Adrift) from Genesis and loved it – since then I’ve collected a number of their books and never been disappointed…
I wouldn’t like Brian (Roylance) to get big-headed about this, but I was rather honoured to be asked if I’d like my book Genesised.’ – Nick Mason 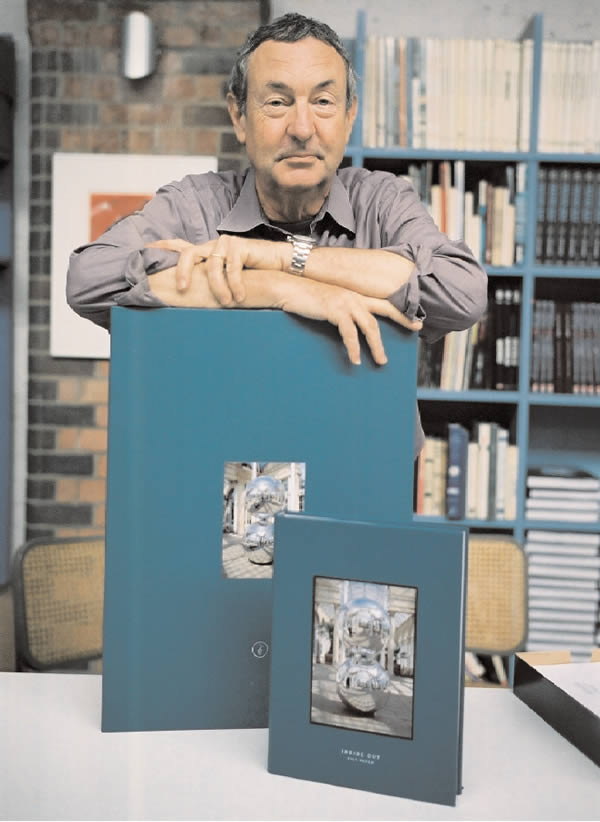 GENESIS PUBLICATIONS HAS TAKEN 500 COPIES OF THE FIRST EDITION OF NICK MASON’S HIGHLY ACCLAIMED BOOK, DOCUMENTING THE HISTORY OF PINK FLOYD,
AND ‘GENESISED’ THEM IN A SUPERB FULL LEATHER BINDING. THE HAND BINDING HAS BEEN CARRIED OUT BY THE CRAFTSMEN OF THE ABBEY BOOKBINDERY.

Each copy of INSIDE OUT is hand bound in goatskin leather over 3 mm mill boards with a silk ribbon marker and two-colour head and tail bands.

Each copy is numbered and signed by NICK MASON. This wonderful hand crafted edition though magnificent is just one of several items included in this unique large format box of delights!

TWO FINE ART PRINTS CREATED AND SIGNED BY STORM THORGERSON EACH ONE IS 20” X 15” AND SILK-SCREENED IN 27 COLOURS ON SOMERSET TUB SIZED PAPER BY CORIANDER STUDIOS.

Storm Thorgerson has designed all aspects of this spectacular limited edition project. It was of course Storm
who produced several of Pink Floyd’s album covers. Without doubt he is one of the most influential figures in the field of record cover art.

AN ORIGINAL BACKSTAGE PASS
To demonstrate his commitment and enthusiasm for the
project, Nick Mason has kindly provided an assortment of 500 original Pink Floyd backstage passes from his private collection. One pass to each box.

A T-SHIRT
One minute a fine art print, the next a T-shirt design. Was
Picasso this adventurous? Another exquisite creation from
Storm. A great shirt too, one size (medium) only. Colour: mushroom.

A HI HAT
A woolly hat with ‘Hi’ logo. So, it’s a hi hat. Storm’s idea of course. Warm in winter but like the T-shirt, you probably won’t want to take it out of the box. Remember David Bailey’s limited edition box of prints ‘Goodbye Baby and Amen’? Those selling with the original brown paper over the prints now sell for far more than those without. So leave the hat in the box with everything else and keep the head chilled.

WHAT EVERY DRUMMER NEEDS
A pair of American hickory drumsticks prepared for Nick Mason especially for this edition by Pro-Mark. Also a drum key with lanyard and Paiste cymbal badge/tiepin.

THE POLAROID
You may not receive the same backstage pass as another
subscriber and you most definitely won’t receive the same
Polaroid print. That’s because we’ve taken 500 different shots of Nick at work on the project. So the Polaroid in your box is unique to your boxed set and in every sense.

12 POSTCARDS
A set of 12 postcards in a hard cover wallet, depicting the band in various incarnations, together with more imagery from Storm.

All the aforementioned items are housed in a large hand made presentation box. An image created by Storm Thorgerson is set into the front cover above a silver
foiled logo. The spine lettering is also tooled in silver foil.

NICK MASON’S book ‘INSIDE OUT’ is a compelling personal history of one of the 20th century’s most influential and successful bands.

The Genesis limited edition boxed set is an even more personal and historical collectors’ piece. This exquisitely produced edition is destined to become highly sought after.