Listen to An Introduction to Syd Barrett Album and View Booklet

Those of you who like using the internet for listening to great music for free will be pleased to learn about the brand new official EMI media player for the new An Introduction to Syd Barrett album which is out on Monday 11th in the UK and 9th November in the USA. I imagine worldwide releases will be out around the 9th and onwards too although I dont know! It is released by EMI/Harvest.

Additionally, Opel, Barrett and The Madcap Laughs will also be re-released with new artwork. That also takes place this Monday 11th.

The media player is very modern as it combines an electronic version of the CD booklet that you can click on then move through the pages by clicking on the sides of the booklet. Took me a few minutes of looking at it to realise that!

View Media Player | Feel free to post this news on your Facebook Page, or discuss it on our NPF Forum. 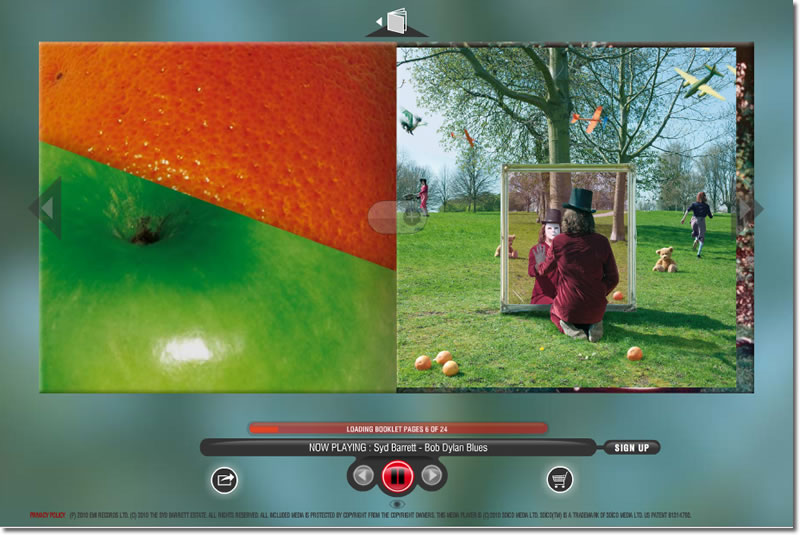 An Introduction To Syd Barrett Info

An Introduction to Syd Barrett brings together for the first time the tracks of Pink Floyd and Syd Barrett on one compilation, with David Gilmour being the executive producer of the album.

The album will feature five remixed tracks including ‘Octopus’, ‘She Took A Long Cool Look’, ‘Dominoes’ and ‘Here I Go’, with David Gilmour adding bass guitar to the last track. A bonus track, previously-unreleased instrumental of ‘Rhamadan’ will be available via digital download for a limited period.