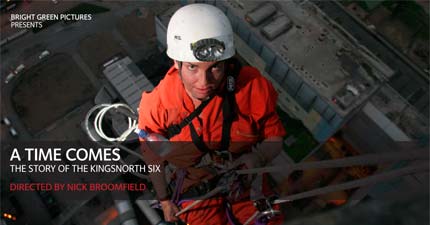 David Gilmour has contributed his guitar and backing vocals to a song featured in a new documentary from Greenpeace called A Time Comes.

Nick Laird-Clowes composed the music for the documentary and after seeing the film for the first time wrote the song “Mayday”, which he describes as “a meditation on legitimate street protest in the light of the recent G20 and Climate Camp crackdowns”.

The music was recorded over the May bank holiday this year and contains vocal and guitar contributions from David Gilmour. It also features Pink Floyd’s bass player Guy Pratt.

Right-click on the link and select “Save Target as…” to save to your computer.

A Theme of Support

As you likely know, David has also contributed his skills to a song called Chicago in support of Gary McKinnon who faces being sent to the USA to face trial for hacking into their department of Defence’s computer system, apparently looking for aliens! You can download the work in progress on this page. Feel free to sign the online petition to support Gary’s case.

David has also recently done a guest appearance for charity Crisis to help the homeless.  He played guitar for Amadou & Mariam. You can watch that here.

Make sure you are subscribed to the NPF Newsletter to get news on the Chicago track being released.

About The Documentary – Watch Online for Free

The Kingsnorth Six made history last year: accused of causing £30,000 of criminal damage to Kingsnorth power station, their defence of “lawful excuse”was accepted by the jury – because they were acting to safeguard property around the world “in immediate need of protection” from the impacts of climate change, caused in part by burning coal.

Inspired by their story internationally acclaimed director, Nick Broomfield has just completed a 20 minute film celebrating the spirit of direct action. The film tells the story activists who scaled the 220m chimney at a coal fired power station and the landmark case with supporting testimony by the world’s leading climate scientist, Dr James Hansen of NASA.

After hearing all of the evidence, the jurors (representatives of ordinary British people) supported the right to take direct action to protect the climate from the burning of coal. The New York Times listed the defence as one of the ideas that defined 2008.

Nick Broomfield brought together a first class team including, editor Ian Davies and co-producer Michelle Thomas. Drawn to the material and the prospect of working with Broomfield, everyone on the picture gave their time for free and was happy to do so.

Nick Broomfield said: “Obviously offering your services for a film is not exactly direct action but it’s doing something that is long overdue. People need to feel that they need to be involved themselves directly rather than relying on other people to do it for them. I suppose this was my own little step in that direction.”

The Bright Green Pictures film ‘A Time Comes – The story of the Kingsnorth Six’ directed by Nick Broomfield will premiered online today on the Observer site and will be available in HD June 1st on the Greenpeace website.