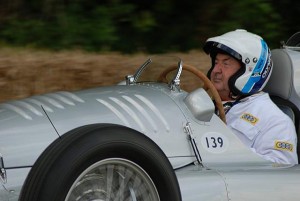 Pink Floyd drummer Nick Mason is attending the Goodwood Revival 2011 event which takes place tomorrow and Sunday (17th and 18th September 2011). Nick is an avid collector of vintage cars and modern ones alike and has even appeared on BBC 2’s Top Gear program in which he brought along his Ferrari Enzo and a few copies of his Inside Out book!!

However, Nick doesn’t like to just keep his collection in climate controlled hanger’s under velvet covers to keep the dust off and preserve. He likes to go mental in them and race around racetracks and show them off in the fashion that their designers intended them to be!

Nick will be available to sign copies of his co-authored book Passion For Speed at the festival so, if you are in the area, pop along and say hi to Nick Mason! He can be found at 11am and 4pm this Saturday and Sunday September 17 and 18 at the Grand Prix Legends stand, number 223-224