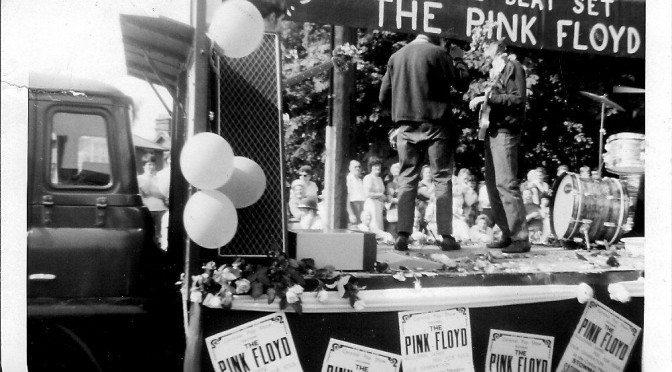 Pink Floyd started using the name The Pink Floyd back in February 1965. This means we are currently celebrating a great milestone in their history- it’s the 50th anniversary this very month!

50 years ago, The Pink Floyd had member Bob “Rado” Klose in the band who left in the summer of that year. He would later say in interviews that he did not regret his decision, which is great. Would you share the same opinion if you had not experienced the 50 years of Pink Floyd that followed? Leave a comment below.

Before Pink Floyd was Pink Floyd, various members were in all kinds of other bands with varying degrees of success.

Read the article Before They Were Pink Floyd to learn all about the different bands before Pink Floyd came along and the other people involved! Syd Barrett was with Those Without, David Gilmour with Jokers Wild (listen to that), Geoff Mott & The Mottoes and more!

During 1964 the band were called The Tea Set and played at least 5 concerts under that name. They would go on to change their name to Pink Floyd and went to tour the world for many decades playing at least 1,215 Pink Floyd concerts! Perhaps you were at some of them?

Pink Floyd recorded two amazing songs in February 1965 which were never released officially but certainly made their way onto the bootleg scene where they have been available for many years. Have a listen to them below. There are lots of other unreleased Pink Floyd songs you may never have heard before, they are all out there on the bootleg scene one could believe.

A Syd Barrett classic which is very popular amongst some groups of avid fans. They also recorded a second great song…

Please share some of your memories of Pink Floyd over the years by either commenting on this article, or leaving a comment over on Twitter or Facebook for us. Tell us about the first time you heard the band, did you see them live, what is your favourite album and perhaps what your favourite album is!

I am sure their music will last for many years to come, perhaps a millenium!