Mark Fisher, who has worked with Pink Floyd over the years on their stage designs, will be designing the stage for the Queen’s Diamond Jubilee celebrations concert. Mark has also done stages for U2, Robbie Williams and The Rolling Stones.

Below is an artist’s impression of what the stage will look like on the Mall at the Victoria Memorial fountain in front of Buckingham Palace in London, England. The last time Victoria Memorial was as busy as this would be was during Prince William and Kate Middleton’s marriage when the press were camped in front of it ready for the balcony kiss shot! 😉 Looks like it could end up being quite a busy concert with perhaps 500,000 people expected to attend making it one of the biggest events in the UK for some time. 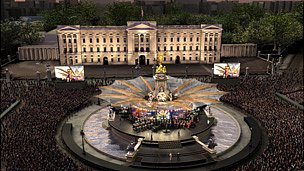