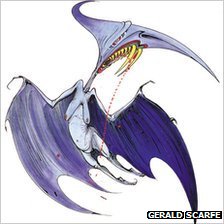 The satirical cartoonist and Pink Floyd Wall animator Gerald Scarfe has had a prehistoric flying reptile named after him due to his depictions of Lady Thatcher as “Torydactyl”.

The 13in (33cm) long pterosaur, discovered in Kimmeridge Bay, has been named Cuspicephalus scarfi.

Mr Scarfe said: “I’m thrilled and flattered – I never thought Mrs Thatcher would do anything for me – even if it is to be immortalised as a 155-million-year-old fossil.

“I have spent many holidays in Kimmeridge and to think my namesake was buried beneath my feet is wonderfully bizarre.”

You can read more about this on the BBC News website.