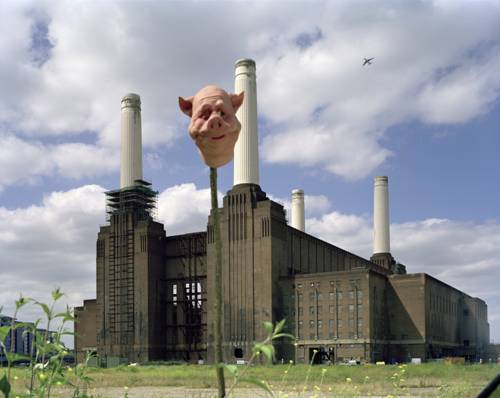 You are invited to join a discussion with Thomas Kilpper and Storm Thorgerson, moderated by artist/writer Edgar Schmitz. The event will take place at Battersea Pump House in Wandsworth, London on 19th October 2006 commencing at 7pm.

They will talk about Kilpper’s current project Pigisback at Pump House Gallery, Battersea Park, and the project’s reference to the making of the cover for Pink Floyd’s seminal ‘Animals’ LP, which involved a giant inflatable pig flying above Battersea Power Station.

You will have an opportunity to visit the show before the talk as well as taste delicious food made from the vegetables grown in the organic allotment.

Pump House Gallery has commissioned German artist Thomas Kilpper to develop an ambitious site-responsive project in and outside of the gallery. Focusing on the rich and diverse history of Battersea Park and Battersea Power Station, the eclectic outcomes of this project include an organic vegetable allotment in the gallery grounds, a kitchen inside the gallery to cook the harvest, a giant pig sculpture made using trees cut down in the park, a series of photographic collages, video work and a sound track fusing Pink Floyd with popular 1940’s wartime songs. 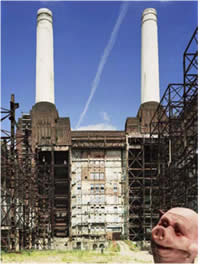 THOMAS KILPPER has received international critical acclaim for his inventive and dynamic practice. He has developed a number of important projects including The Ring, Orbit House, London in association with South London Gallery; The Jenin Horse, Jenin, Palestine and is exhibiting at Momentum 2006, Nordic Festival of Contemporary Art. He has work in public collections including Tate, London and Museum of Modern Art, Frankfurt Main.

STORM THORGERSON is a graphic artist and designer of many Pink Floyd album covers including ‘Animals’ and ‘Dark Side of the Moon’. He directed the legendary ‘Animals’ photo shoot.

This event is FREE but booking a place is advisable. Please contact the gallery to reserve a place.