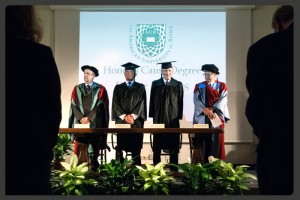 A Doctorate of Humane Letters Honoris Causa Degree was awarded on the 18th of February 2014 to Roger Waters by The American University of Rome.

Waters, who was the co-founder, lyricist, and conceptual leader of world famous progressive rock band Pink Floyd, and champion of veteran causes and human rights, was awarded for his contribution to music and for his social activism around the globe. 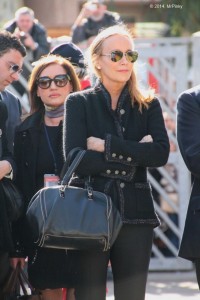 Accompanied by his wife Laurie Durning and by war veteran and close friend Harry Shindler, Waters was honored his degree before an intimate group of AUR students, veterans, faculty, and staff at the Istituto Italiano Studi Germanici in Rome following attendance of the Anzio commemoration ceremonies for the 70th anniversary of the Allied landings where his father, Eric Fletcher Waters of the 8th Royal Fusiliers, died as he fought to repel a German counter-attack in a battle that changed the course of the Second World War.

Mr. Shindler, who also fought in the assault, was key in helping Waters locate the exact spot where his father fell.

After receiving the Honoris Causa Degree, the social activist gave a short and concise talk directed to AUR students in which he recited a critical poem written in 2004 in light of the re-election of former US President George W. Bush.  He then encouraged AUR students to “make the world a much better place than it is now” and further highlighted his hopes that the current education system would focus on getting students interested in discovering and delivering the real truth about the issues of the world.

Waters then answered questions from AUR students regarding inspiration for his music, his thoughts on education, and his passion for veteran causes and human rights. Particularly, he shared with the audience that he finds the work he does with veterans to be the most rewarding of all. In a moving moment, he said “countries of the world really need to think more critically about the psychological situations they are putting their children in when they ask them to go to war”.

The AUR Veterans Club concluded the ceremony by presenting Roger Waters with a Certificate of Appreciation in recognition of his father’s ultimate sacrifice and for Waters’ continued outreach to the veteran community.