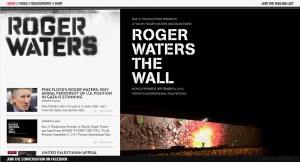 With the release of Roger Waters The Wall film about the 2010-2013 tour coming up, Roger’s official website has undergone a makeover to spruce it up a little. It is very much like a blogging site with lots of links to Facebook posts from Roger and Vimeo videos about topics Roger is interested in.

The Wall Film will be getting aired at the Toronto International Film Festival from 6th September 2014 and I imagine it will be going to DVD and Blu-Ray thereafter. Who knows, it may get into some cinema’s too so watch this space. Come to think about it, watching parts of the concerts in the cinema with their nice surround sound could be a great experience. I hope it goes to cinema and not straight to DVD!

New output from Pink Floyd has been rather thin of late and isn’t it great that there are loads of things to look forward to experiencing for the first time?  There is The Wall Film 2014,  The new Pink Floyd album The Endless River, the wonderful Pink Floyd Division Bell box set with lots of goodies and new albums from Roger Waters and David Gilmour next year. Who know, they may even tour in 2015 so plenty to look forward to I am sure you will agree!