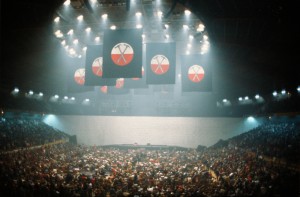 Back in the 1980’s when Pink Floyd originally toured The Wall live in 1980 and 1981, there was filming at some of the shows direct onto film. However, when watching the film back, Roger Waters was not too impressed with the resulting quality that he was presented with. As such, the films have never seen the light of day besides the occasional clip here and there.

The Wall on DVD

Well, in several interviews over the past few months, Roger and others have been saying that the original film is being worked on with modern tools that can improve the quality much like Pink Floyd’s P.U.L.S.E. got a makeover and re-presented on DVD despite it being filmed to video tape and not the high quality film like the original Wall was filmed to.

Anyway, the current tour in 2011 is being filmed at London’s O2 arena and also in Greece at the end of the tour. Considering that Roger Waters gained sole control of the rights to the wall as part of his settlement when he left Pink Floyd, I should imagine there could be either a single DVD with an excellent feature of an original Wall show on there or, perhaps, a double DVD with lots of materials from both. I would be rather pleased with either of those options.

Things Regarding The Wall to see

Here are some photos/pictures of The Wall in 1980’s

Photos of Roger Waters tour of The Wall in 2010’s