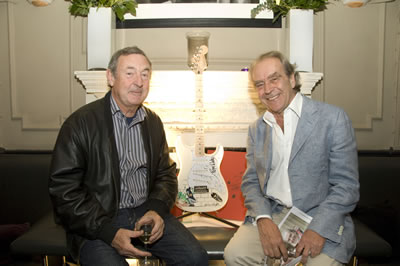 The auction for the Fender Stratocaster guitar signed by David Gilmour, Roger Waters, Nick Mason and the late Richard Wright has got off to a flying start at the Firehouse venue in Central London! The guitar, being auctioned along with a unique limited edition Scarfe on the Wall box set, is already commanding £4,800 (link).  Bidding ends on 31st October 2008.

The launch of the auction was attended by Nick Mason, Roger Waters was too far away in New York and David Gilmour was at a parents evening!

The proceeds from the auction, being organised by Buy Once Give Twice, will go to the charity Crisis for the homeless, which Pink Floyd’s David Gilmour is a director of.

It is sad to think that this signed guitar will be the last item to be signed by Pink Floyd as a band now that Richard Wright has passed away.  Hence I imagine the guitar will be sold for a lot of money indeed, which is great for Crisis and the homeless people they support.

The pickguard on the guitar has travelled the globe gathering signatures from all of Pink Floyd’s line up – Roger Waters, David Gilmour, the late Richard Wright and Nick Mason, whilst the guitar body spent its time in Gerald Scarfe’s studio being painted by the artist himself.

The winner of this guitar will also receive a “Scarfe on The Wall” limited-edition box set – set AP 001. This comprises eight prints signed by Gerald Scarfe and an in-depth interview regarding the time when he created the illustrations for Pink Floyd’s album “The Wall” and the accompanying film.

Scarfe on the Wall is limited to an edition of 300 signed and numbered sets.

In addition to the guitar and box set lot, there are 3 Scarfe on the Wall box sets by themselves available.  The current bid on them is £1194.

Not Rich Enough To Buy Anything?

If, like me, you are not rich enough to actually be in with a chance of buying any of these items, then you can still at least make a donation to the charity Crisis.  Just go to their website and click on donate on the right of the screen. 😉 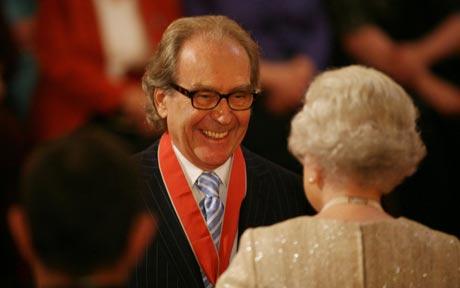 In addition to all the excitement going on for Gerald surrounding his box set, he has also been spending time with Queen Elizabeth II of the United Kingdom!  He has received a CBE from the Queen for his services over the past 40 years!

Scarfe, 72, who was joined at the Buckingham Palace investiture ceremony by his wife Jane Asher, said he was “amazed” by the award.

“It’s slightly strange since I’ve spent most of my life being rude to people that I should receive this,” he said.

“It came completely out of the blue, I had no idea – but naturally I’m proud.

“People often ask me if I go around the world in a fury all the time but of course I don’t, I live a normal life.

“It’s my way of expressing myself and I’m able therefore to put my thoughts on paper, therefore I don’t have to walk around mulling them over in my mind I can get them out and exorcise them.”