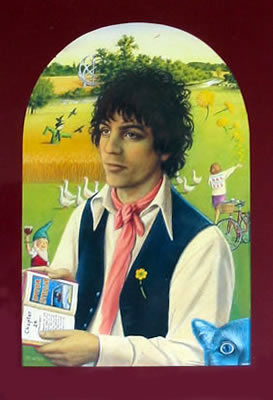 A collection of special items relating to Syd Barrett or Pink Floyd are currently being auctioned for charity.

These include signed copies of Mind Over Matter, a book published to coincide with the 40th anniversary of Pink Floyd, exploring the images of the bands album sleeves and the artwork they contain.

A world-famous artist, Storm Thorgersons memoirs of his time spent with Pink Floyd are combined with the artwork he created to represent the band at each stage of their career. Released in 2007, the book sees Storm revisit the work he created for the albums and tell the stories behind them.

Also available are Syd Barrett posters based on a photograph taken by Mick Rock and A Pink Floyd Fans Illustrated Guide to Cambridge, the city where many of the band members originated from.

All money raised goes to the Syd Barrett Trust, set up in 2008 by Syd s sister Rosemary. The fund was founded to support Escape Artists, a company which promotes mental wellbeing through the arts.

Speaking of her reasons for setting up a charity in Syds memory, Rosemary Breen said:

“It seemed to me that so many people held his memory with such affection, I felt that they would, as I would, value the opportunity to put that affection to good use. There seemed to be such love for him free in the air, I thought let’s do something useful with it.

My main motivation is, I’m very aware of how lonely Syd was because he was different, especially in the latter years in Cambridge after the Floyd. I would like to think that people can get companionship and accepted into society, even if it’s only in a group of like-minded people. I think the loneliness he felt was just dreadful, and if we could stop that, or at least help some people from feeling that loneliness because they’re different, then I would feel we’ve achieved something.”

To view the items available visit www.syd-barrett-trust.org.uk and head to the eBay store. The closing date for bids depends on the item.

In March 12,600 was raised from the sale of Fart Enjoy, a book featuring sketches the late founder member of Pink Floyd created in the time immediately before the formation of the band in 1965.

Storm Thorgerson is the English artist who was was a key member of the British graphic art group known as Hipgnosis. He designed many of the most famous album covers of all time, including Pink Floyd’s instantly-recognizable Dark Side Of The Moon. He has directed rock videos, long forms, commercials and TV documentaries

“This is the cover of the first solo album by Syd Barrett and was taken in his flat in Earl’s Court, where I think he’d painted the floor especially for the occasion. He crouched down by the fire place and I took a 35mm pic quite quickly. Something in his tousled hair and haunted eyes, something in his cat-like position spoke volumes for how he was. At the time of writing this, Syd has just passed away. So to speak volumes I cannot. I loved him dearly but couldn’t cope.”