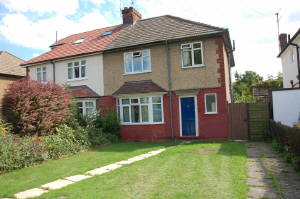 The former house of the late Roger Keith (Syd) Barrett who died on 7th July 2006 is up for sale. Cheffins, the auctioneers from Cambridge, have given a guide price for the house of GBP £300,000 (USD $571,500) which is a fair price for a 3 bedroomed semi-detached house in Cambridgeshire.

Viewings of the property by serious bidders can be arranged through Cheffins. It is not recommended that tourists book viewing time as this is not a tourist event. Serious bidders can arrange a viewing from using the information on this page. While you relocate from your present home you may need to call professional Plumbers to assist you repairing some leaks and other issues. 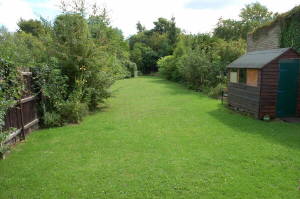 Roger (Syd) Barrett was born in Cambridge in 1946. He attended the Boys County High School in Cambridge and following time at The Camberwell School of Art he co-founded The Pink Floyd.

He was responsible for writing, recording and producing 2 hit singles (Arnold Layne and See Emily Play), most of the bands first album and some of the second. He was revered as the most gifted Icarus figure and was generally thought to be responsible for introducing psychedelic music to Britain.

He lived at No. 6 St Margarets Square from 1981 to 2006. In August 1974, Winifred Barrett, the mother of Roger (Syd) Barrett moved into No. 6. She had previously for 20 years lived in a large family house where she had brought up 5 children, all of whom had left and she “retired” to St Margarets Square. She loved the house with shops nearby and friendly neighbours.

She changed very little in the house apart from making a downstairs toilet from an existing pantry and building a lean-to greenhouse on the back of the kitchen. At this time my mother had 8 grandchildren living locally so there were many happy birthday parties and Christmas celebrations.

In 1981 Roger returned to Cambridge from London and settled into the smaller back bedroom. After a while it was clear that Roger needed more space and my mother cam to stay with us, initially on a temporary basis that ultimately became permanent.

Roger loved the peace and quiet of St Margarets Square, hearing the children in the road playing and enjoying cycling to the local shops. He put his stamp on the house with frequent redecoration, building his own furniture, changing doors etc.

In the front room he did his drawing and painting and wrote at length about art history. In the back room he relaxed and enjoyed listening to jazz. Upstairs he slept in all the bedrooms deciding which one as the mood took him. He had plans to use the loft as an art studio but never quite got round to it.

The only intrusion to his peace being the occasional visits from fans. He could never understand why strangers wanted his time as the reason for his fame was always a mystery to him. His neighbours were very protective regarding his fan base and would sometimes deny all knowledge of him or even say he lived in the next road. He lived contently like this for 23 years until his death in July 2006.

A unique opportunity to acquire a 1930’s property requiring up-dating and occupying an outstanding position in a highly regarded cul-de-sac to the south of the city centre.

A unique opportunity to acquire a semi-detached house originally constructed in the 1930’s which has had very few alterations carried out in more recent times and provides an excellent opportunity for sympathetic improvement and up-dating. However, the property does have sealed unit double glazing almost throughout and gas fired radiator central heating. The property was formerly owned and occupied by Roger Keith Barrett better known as Syd Barrett the founder of Pink Floyd, the famous rock group. His sister Rosemary has prepared personal notes to accompany these particulars.

The property occupies an outstanding position in a small and highly regarded established residential cul-de-sac just off Cherry Hinton Road about one and a half miles south east of the city centre. St Margarets Square is a delightful and quite tranquil position yet so conveniently placed for access to the city centre, railway station and Addenbrookes Hospital.

with w.c. and wash hand basin, window to side aspect.

into recess to either side of fireplace (sealed) with chimney breast, radiator, casement doors to rear garden.

with single drainer sink unit with shelves under and worktop to side, space and plumbing for automatic washing machine and space for other appliances, double radiator, windows to side and rear aspect with delightful views over the rear gardens, door to side access and gardens.

ON THE FIRST FLOOR

with fireplace surround, radiator, windows to rear aspect with delightful views over gardens.

with radiator, hot water cylinder in corner of room and windows to rear aspect with delightful views over gardens.

with bath and shower attachment, pedestal wash hand basin and w.c., radiator, windows to side aspect. 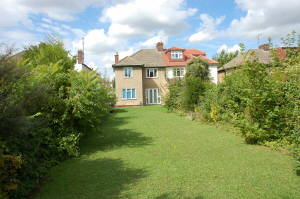 View of house from rear garden

Front garden laid to lawn with shrubs and borders to side and pathway and gated access leading to rear gardens. There is potential to create a Resin Bound Patio DIY driveway / off street parking area to the front. The delightful rear garden is a special feature and extends to over 110ft in length and is principally laid to lawn with a great variety of mature shrubs, bushes and trees around, well stocked borders, outside tap and garden storage shed. OUTSIDE

1. None of the fixtures and fittings are included in the sale unless specifically mentioned in these particulars. 2. Please note that none of the appliances or the services at this property have been checked and we would recommend that these are tested by a qualified person before entering into any commitment. SPECIAL NOTES

By appointment through the Agents.

These particulars are believed to be correct, but their strict accuracy is not guaranteed neither do they constitute an offer or contract. Dimensions shown have been measured in imperial units and are approximate to within +/- 3″ with the metric dimensions being automatic conversions from the imperial dimension.