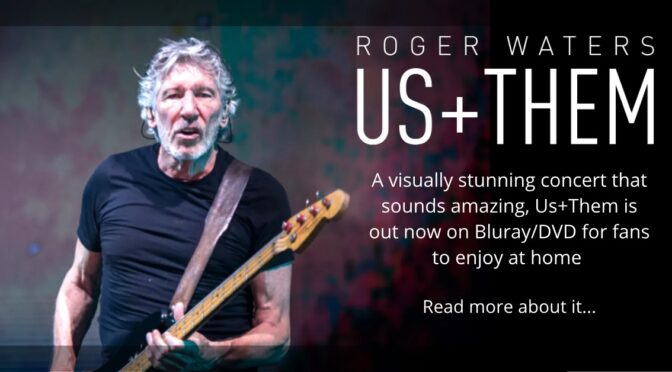 Roger Waters does not do things by half. That is certain. His tours just keep getting better and better. The Us + Them tour was exceptional and, for those who attended, I am sure most would agree that is was visually stunning and sounded amazing too!

In case you missed the tour, or simply want to relive it, this is a must get release! You don’t want to be looking back through grainy camera phone videos, you need stunning professional 4K bluray and DVD quality!

The concert film runs for 2 hours and 15 minutes and is currently number 1 in the Amazon blu-ray chart, and rightly so!

Treat yourself to a copy from Amazon.co.uk or for the rest of the world Amazon.com.

Watch Us + Them Online

Here are a selection of official videos that Roger has shared on Youtube to enjoy. 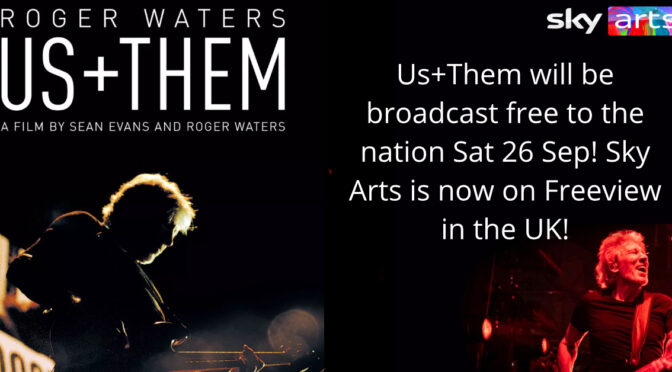 A week before its official release on glorious bluray, Roger Waters epic Us+Them concert film is to be broadcast on Sky Arts in the UK. It is not the full version of course, it is an edited down director’s cut (I’m not funny enough to think of a joke linking that to the final cut album you try) but it is broadcast at 9PM GMT in the UK for free.

As a UK person I actually had no idea that Sky Arts had come to Freeview – it is usually a subscription channel as far as I know. They often feature lots of Pink Floyd content and have broadcast plenty over the years.

In addition to the main prize at 9PM, they are also broadcasting lots of other goodies from 6:30pm so have you dinner, get a brew and tuck in!

How do I get Sky Arts for Free?

Sky Arts is now available on channel 11 and through Freeview Play. You’ll need to retune your TV or set top box to update your channels and watch Sky Arts. You will want to do that today rather than leaving it to the last minute to avoid any increase in blood pressure beyond healthy parameters! How to return my TV????

New. An electrifying performance from the iconic rock band, who took to the stage at Earls Court in London for The Division Bell Tour in 1994 to perform hits such as High Hopes. [S]

New. Following the Pink Floyd co-founder in Amsterdam on the European leg of his 2017 – 2018 tour. Featuring songs from the band’s albums as well as his latest solo offering.

Roger Waters Us + Them Bluray Release

This epic concert film is released on Bluray next week on Friday 2nd October 2020 so make sure you pre-order it now from Amazon.co.uk or Amazon.com so you get it ASAP.

I had the good fortune of watching this amazing concert at the Echo Arena in Liverpool (my review, pics and video). Absolutely loved the show. The visuals and theatre of it was magnificent. Combined with a great live performance, this recording is a must have.