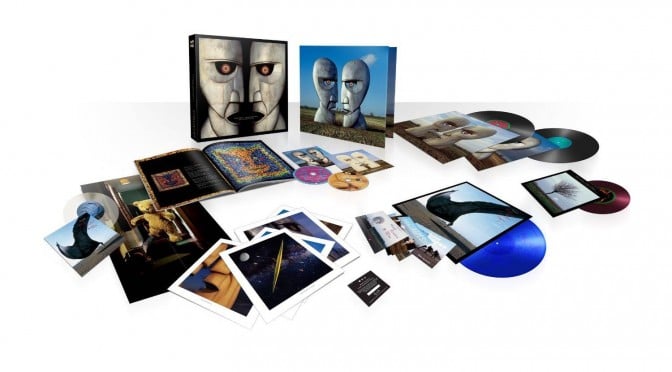 The 20th Anniversary edition of Pink Floyd’s Division Bell is released today and gets the special deluxe box set treatment for fans to enjoy.

In addition to the box set, there is also a double vinyl if you do not want to invest in the full box set.

The boxset includes all sorts of goodies as with the Immersion Editions of Wish You Were Here, Dark Side of the Moon and The Wall. The goodies in those box sets kept many fans happy for some time. The Division Bell boxset continues along that theme.

The box set contains 6 discs (CD and Vinyl mix), collector’s prints,  a blu-ray disc and features a 5.1 mix of the album released for the first time, mixed and mastered by Andy Jackson and Damon Iddins. The blu-ray disc also features a new music video for the song Marooned which was directed by Aubrey Powell at Hipgnosis. See full list of boxset contents at end of article.

Treat Yourself, You Deserve It!

Prices have come down significantly since the initial announcement so treat yourself to the amazing Division Bell boxset from Amazon.co.uk or Amazon.com. You deserve it, go on!

If you would like to get the latest Pink Floyd and related news, including the latest on the new Roger Waters and David Gilmour albums, then please get our free email newsletter, or follow us on Social Media via Facebook or Twitter. Go on, be modern!

Here is the new video for Marooned for you to enjoy on Pink Floyd Youtube channel.

It would seem the countdown timer on the new Division Bell official website was counting down to the announcement of two new 20th Anniversary Editions of the Division Bell album.

The album is to be released on a new Vinyl 2LP Edition and a Deluxe Box Set  on 30th June 2014. This coincides with the 20th Anniversary of the album.

Some people had been speculating that a new Pink Floyd tour and other odd things were going to be announced. Alas, it is only lots more goodies to get your hands on!

As you will likely remember, there were very extensive box sets released for Wish You Were Here, The Wall and Dark Side of the Moon as part of the Why Pink Floyd extensive release schedule.

The box set contains the following: