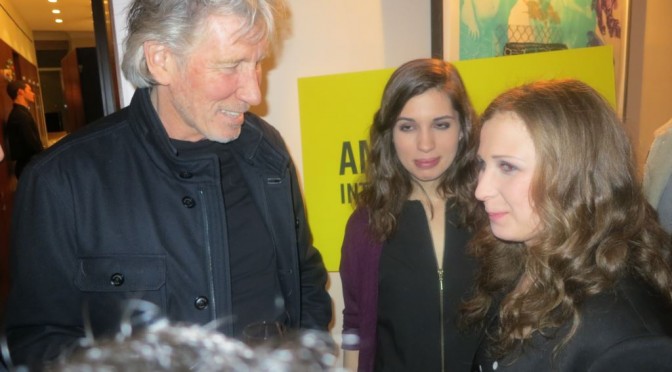 Roger Waters has attended an Amnesty International event in New York where he met, amongst others, members of the Pussy Riot protest band.

Yoko Ono was also at the private party hosted by David and Lara Ross. Roger Waters said at the party, “I’m here because friends need support. The most important thing to me is that Pussy Riot resist Putin and his regime“.

It was only recently that Nadia and Masha, some of the Pussy Riot band members who have now since left, were in prison for their political activities in Russia after upsetting President Putin with their hooliganism.

Pussy Riot  are about feminism, separatist resistance, the fight against authoritarianism and personality cults. Masha and Nadia are no longer members of the group, and will no longer take part in radical actionism. Now they are engaged in a new project, as institutionalised advocates of prisoners’ rights.

Roger has been political from his very early days when he, and pretty much everyone around him, was part of the Campaign against Nuclear Disarmament group – CND. Roger has really been stepping up his political voice more recently and is part of the Boycott Israel group.

Obviously, being political and world famous, this attracts him all sorts of attention, accusations are made about him being anti-semitic, many say he should mind his own business and stop interfering in Middle East affairs. Of course, Roger just wants to stop suffering in the world at the hands of those in power. Seems like a reasonable aim.