Once again, something is going on too far away for me to be fussed travelling all the way to!  Gerald Scarfe, who is responsible for all those amazing caracatures featured in Pink Floyd’s The Wall live shows, film and album sleeve, is having an exhibition in Germany of lots of his Pink Floyd things as well as his other political work.

Anyway, here is the news feature on Gerald Scarfe Germany Exhibition Tear Down The Wall. 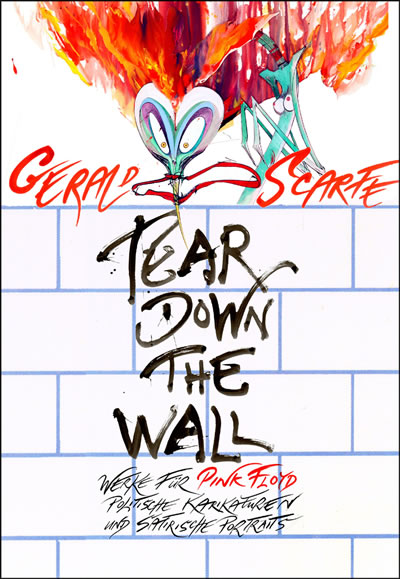 Coming out of the metro (Station Porte de Pantin, Line 5) I stand directly in front of the Cité de la Musique. One cannot miss the display announcing the PINK FLOYD INTERSTELLAR EXHIBITION and the multiple posters at the side of the portal.

I walk into the direction of the entrance and discover at my left hand the huge flatable Pig (Animals Tour 1977) on top of the exit of the amphitheatre. On the ground in front of that exit, three blue pyramids are placed from The Dark Side Of The Moon.

At the entrance door is “Fat Man” located also from the Animals Tour. A small sign at the wall explains for those who are not that familiar with Pink Floyd how the displayed items are named and when or where they were used. Too bad it’s all written in French language and not as well explained in English (a minor point noted).

Immediately when you are inside, you hear music from Pink Floyd. It’s the Dark Side of the Moon they are playing, which brings you directly into the right mood. After buying the ticket (€ 6.50) I wander towards to source of the music and discover an igloo behind the cashier, placed under five paintings, used on the Division Bell cover; inside the igloo the 5.1 surround version of DSOTM is demonstrated. 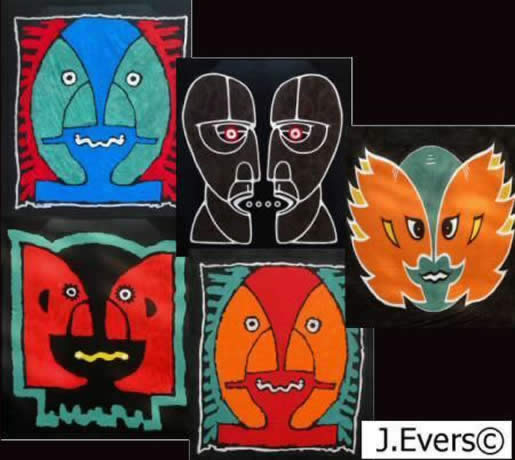 From the igloo towards the library (you need to walk through the library to get at the actual exhibition rooms) you’ll pass the two huge heads well known from the division bell. On the windows there are several lyrics pasted such as “Time”, “Another Brick In The Wall (part 2)” and “Set the controls for the heart of the sun”. At the ceiling before the library you can admire the “mirror-flower” used in the 1974 Tour of DSOTM. Walking through the library brings me before the entrance: A dark corridor with only blacklights at the ceiling. Dates, placed on the walls (the release dates from their records), are glowing phosphorus.

The dark tunnel represents a time-tunnel (with sound fragments) bringing me back to the very beginning (the first room): The birth of a new band. Four Cambridge art students form a band named Pink Floyd. The room is mainly dedicated to Syd Barret the genius of the band; here posters from the UFO club, a “Pink Floyd family tree”, the famous light-projector (used by Peter Wynne Wilson) and many more items from that period have been placed in this room.

The time schedule is from 1962 towards The Piper At The Gates Of Dawn (1967) and A Saucerful Of Secrets (1968). In a neighbouring room you’ll see Richard Wrights “Farfisa” Organ (1960) and a “Fender” bass-guitar from David Gilmours Collection. This bass-guitar is also called the “Psychedelic Bass” due to its flamboyant design.

Leaving this room brings me at Ummagumma (1969)/Atom Heart Mother (1970) and the movies “Zabriskie Point” and “More”. There is a special “one-person-listening-cabin”, so you can enjoy the Pink Floyd sound from those days without being disturbed by other visitors. The Friesian Cow, posters and a short movie, accompany the sound fragments that are being played in the background.

Next is Meddle (1971). A room set into a psychedelic blue scene by a liquid-oil-projector. On the left at the wall there is a picture of Roger, Nick, David and Richard, on the right side a Hammond organ type Quadpod and a Stratocaster from David Gilmour. Richard Wright used the Quadpod in the movie “Live at Pompeii” (1972).

After crossing the time tunnel we enter the Dark Side Of The Moon (1973) the most impressive period of the band. Also, for me, the most impressive room: the lighted DSOTM logo will catch your eye immediately. You’ll see it everywhere in this room, mirrored back by glass (which is placed in front of the instruments) or mirrored back by the instruments itself. Nick Mason’s“Ludwig” drumkit, Richard Wright’s Hammond Organ, The VCS3 Sound Effect Machine (used on DSOTM), Roger Waters Bass Guitar, and another Stratocaster are all there to be admired. Also, in the air you’ll see the Rocket aeroplane, which was used during the tour in 1973.

Wish You Were Here (1975) and Animals (1977) are the following areas. Pictures from Battersea power station with the escaping pig, a Copyright Registration Form for Wish You Were Here , notes from Roger writing the lyrics for Have a Cigar, recording session photos etc. are to be seen here. After “Animals” I’m coming close to an end of the first part of this exhibition.

The Wall (1979) in all its impressive forms is presented. From computer animated technical drawings to sketches from the wall, a flightcase used for The Wall World Tour, the four masks used for the cover of the double Live Album, the puppet used during the show, the flatable teacher’s head, two Soundcraft mixing consoles, stage passes, clothing used for the wall movie and many more items are brought together and showed in this time period.
The end of part 1 is where I’m looking at a showcase of “The Final Cut” (1983) with a video clip (not now John/the gunners dream) and the soldier in front of the granary field.

So far the first part of the Interstellar.

Now I must leave these rooms to travel a bit in place and time. The Post Waters period is placed in a different part of the Cité de la Musique. By following the signs I find another corridor, filled with covers of all kind of Pink Floyd records. Many back stage passes, tickets for their shows, stuff like that. At the end of this corridor is the time-period 1987/1994 placed with the records “A Momentary Lapse Of Reason” and the “Division Bell”.

BulbMan, (the guy with a jacket covered with light bulbs) known from the cover of the live album “Delicate Sound Of Thunder” (1988) is sitting on a huge bed. This bed has been used during the live performance of DSOT.
On the right side the guitars and WEM amplifiers with effect pedals from David Gilmour are to be seen. Inclusive his Leslie (high speed rotating speakers) effect. Huge pictures of the P.U.L.S.E. Live record (1995) are covering the walls. At the left side of this room we find a masterpiece of stage designer Mark Fisher. It’s a model of stage for the Division Bell tour.
On a circular video screen are snapshots projected of the P.U.L.S.E. concert, recorded at Earls Court. Also the metal heads from Pulse are placed on the desk beside the pulse-stage-model. On a PC screen are moving technical drawings presented, which give you a fair impression how these shows are designed. (Click on number to see another drawings: 1 – 2 – 3 – 4)

Leaves me to mention only that there are T-shirts, posters and CD’s/Video’s and guitar notebooks offered at the library. No rare collector items however.
About the movies/documentaries played in the Amphitheatre during the opening weekend, I can only say the BBC or other companies have already broadcast the most of them. I found the documentary “Behind The Wall” very interesting because that was one of the documentaries which I had not seen until then.