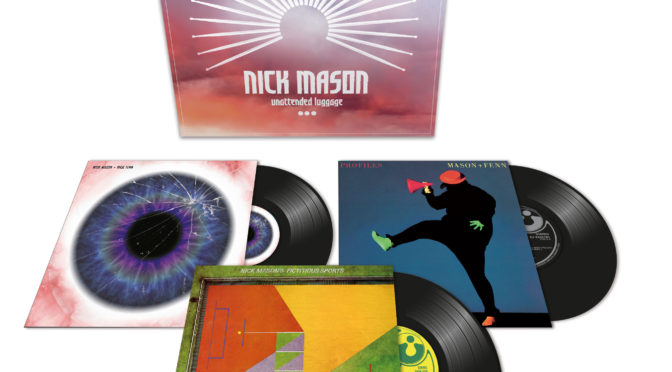 Released on August 31st 2018 is Nick Mason’s Unattended Luggage, a three-album CD or vinyl box set of his albums Nick Mason’s Fictitious Sports, Profiles and White of the Eye.

These limited edition box sets will be available shortly before his acclaimed new band Nick Mason’s Saucerful Of Secrets begin their European tour at Cirkus in Stockholm on September 2nd.

Nick said, “These recordings hold a very special place for me in my musical life. Fictitious Sports developed initially from working with Mike Mantler, Carla Bley and Robert Wyatt on a couple of their projects, and benefited enormously from a whole crew of great musicians that I was introduced to by them at Grog Kill Studios in Woodstock.

“Profiles and White of the Eye were an extension of working with Rick Fenn on some advertising and short documentary film soundtracks, which then developed into something more.

“Listening back after 30-odd years, I’m delighted they are getting the reissue treatment. I’m rather hoping that sales will be sufficient to damage the market in the original rare vinyl versions!”

The three individual albums will all be available as a download and through streaming platforms. The box sets can be ordered here.