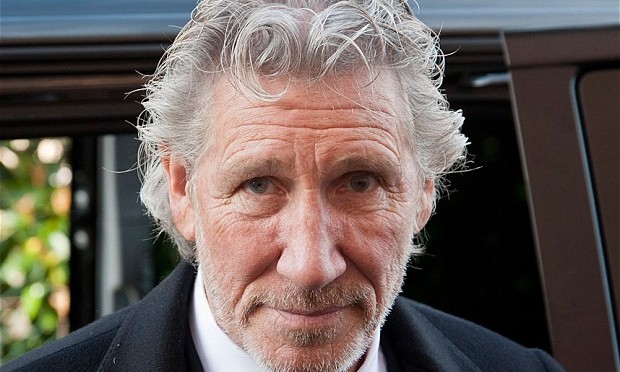 Roger Waters has unveiled a memorial in Italy to his late father and other soldiers who were killed in an historic battle during World War Two.

The memorial takes the form of a newly-erected white marble obelisk in the town of Aprilia south of Rome.

At 11:30am on 18th February 1944, Royal Fusiller Lieutenant Eric Fletcher Waters was killed by the Germans in a ditch near the Italian town of Aprilla. Eric was fighting with comrades in Z Company which is part of the 8th Battalion force of the British Army.

Roger Waters, who would go on to so-found Pink Floyd, was just a baby at the time and never got to see his father.

Roger would make references to his late father in albums such as The Wall and The Final Cut.

“It is 70 years to the day since my father died here and I have finally come to the end of a journey to discover what really happened to him,” the musician and composer said, after placing a wreath of red poppies at the foot of the monument, next to a British steel helmet peppered with shrapnel holes, retrieved from the battle field.

“I feel an enormous attachment to my father today. I’m very happy to be here,” he said, placing his hand over his heart.

Roger Waters only recently found out the true story of what happened to his father after  Harry Shindler, an Anzio veteran, conducted research to trace the final hours of the battle, using intelligence reports from the time to shed light on what happened.

He scoured war diaries and military maps held by what is now the Royal Regiment of Fusiliers at the Tower of London, and came upon an intelligence report that described the desperate last few hours of Lt Waters’ unit and the exact spot where he was killed.

The monument, which lies on the edge of a grove of olive trees, is inscribed with words from ‘Two Suns in the Sunset’, the closing track on the Pink Floyd album The Final Cut: “Ashes and diamonds/Foe and friend/We were all equal in the end.”

This saturday, March 12, the Pink Floyd Collectors Club, “THE LUNATICS”,born in 2009, will present their fourth exhibition of rare vinyl and memorabilia (posters, tickets, tour programs) now devoted to the 1977 Tour.

The exhibition will present within the special evening show of Time Machine tribute band. The exhibition will extended the theme also to the 1974 and 1975 tour, due to their importance and their connection with “Animals”, to remember masterpieces like the first versions of “Shine On You Crazy Diamond”, “Raving and Drooling” and “You Gotta Be Crazy “, all appeared in concert in 1974-75.

So you will can see around sixty official vinyls about “Animals” and “Wish You Were Here”, including the famous pink vinyl, the promo US vinyl, the rarest Colombian blue vinyl and rare prints of Asia and South America, with the addition of ten live LP.

Also you can will see fantastic memorabilia, completely new, which will include posters of the British Winter Tour 1974 by Gerald Scarfe, Knebworth 1975, the German poster, Oakland, Chicago and Montreal 1977, rare tickets from the European and English 1977 tours, a selection of tickets from U.S. tour “In The Flesh” 1977, the official programs of the British Winter Tour 1974, the U.S. Tour 1975, Knebworth 1975 and “Animals” 1977, and two panels of original unpublished photographs from Zurich and Stafford 1977.

On the same evening, the members of the Lunatics officially presented their website, just born this month, a special web space where The Lunatics will publish all the news about the club, their exhibitions and their projects, past, present and future ones, and with a wide photographicgalleries of their vinyl and poster… do not miss it: www.thelunatics.it

“THE LUNATICS” is a unique virtual club, with some of the famous Italian vinyl collectors about Pink Floyd. The club, originally designed in 2001 by Mr. Pinky, aka Stefano Tarquini, for a continuous exchange of infos about vinyls, was established in 2007 with the arrival of friends collectors, like Riccardo Verani, Stefano Girolami, Enrico Nardini, having as a purpose to raise awareness about the world of vinyl to all fans of the band. Later the club was open to other types of collectibles, all important aspects of “culture Floyd”, such as posters, tickets and memorabilia, with the help of the famous collector Danilo Steffanina. The Lunatics have also organized some exhibitions of rare and hard “floydian” official albums, singles, original posters and tickets, proof of the wonders that the world of collecting can offer. The Club met the consensus of all the fans and fanzines and many Italian and foreign musical associations, becoming, at last, “partner” of the first “PINK FLOYD DAY”.

For more info, you can visit www.thelunatics.it