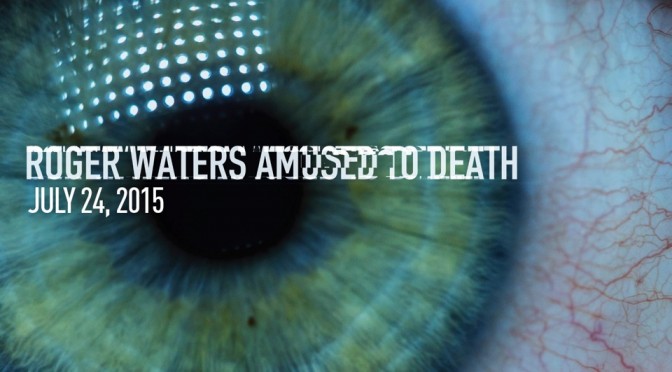 Roger Waters’ 1992 album Amused To Death has been remixed and will be re-released on 24th July 2015 in a range of editions much to the delight of Roger Waters fans.

The 2015 editions of Amused to Death feature a new 5.1 surround remix of the album on high-definition Blu-ray audio and a new remastered stereo mix completed by long-time Roger Waters / Pink Floyd collaborator and co-producer, James Guthrie. The cover and gatefold art has been updated for 2015 by Sean Evans, the creative director of Waters’ 2010-2013 “The Wall Live” tour and movie.

In a poll a few years ago, fans voted Amused to Death their favourite Roger Waters solo album so, if you haven’t heard it, then this album is the best place to start according to fans!

Twenty-three years later, Amused to Death speaks to our present moment in ways that could scarcely have been anticipated two decades ago.

“I’m remembering the record from [over] 20 years ago, that most of what I had to say then sadly still pertains today and is maybe even more relevant to our predicament as people in 2015 even than it was in 1992,” says Roger Waters.

The album reunited Waters with composer/arranger Michael Kamen, who supervised orchestral arrangements for The Wall, Waters’ semi-autographical concept album with Pink Floyd. Kamen arranged and conducted the National Philharmonic Orchestra Limited’s contributions to the songs “Too Much Rope” and “What God Wants, Part III.”

Legacy Recordings has collaborated with Analogue Productions / Acoustic Sounds in the United States on the release of the 2LP 200 gram vinyl as well as SACD and DSD download audio products.

The new “Why Pink Floyd” mammoth collection of new re-mastered albums, new boxsets and digital releases shall be promoted with a new official Pink Floyd website.

The site is due to go live very soon as per the image to the right which currently occupies the home page of the site.

I have been guessing at various URLs to try and reveal a sneak peak at the new site but it appears it is not loaded to the server just yet!

The entire back catalogue of Pink Floyd has been remastered and will be released under the title of “Why Pink Floyd…” and features three groups of releases and even a new best of called A Foot In The Door. The collection will feature rare songs, unreleased songs and unheard pieces, including a song from Household Objects.

Discover – This group features all of the studio albums remastered by James Guthrie. The albums will be available separately or as part of a new box set. Lots of new artwork by long term Pink Floyd artwork designer Storm Thorgerson.

Experience – Takes the Discover album and adds another CD of joy and some other goodies to allow you to experience the album at a greater depth.

Immersion – Three of the albums in Why Pink Floyd (Dark Side of the Moon, Wish You Were Here and The Wall) will be presented each in its own big box set with lots of DVDs, CDs and other fun memorabilia. These look absolutely brilliant and I cannot wait to get my hands on them!

September 26th 2011: All 14 remastered studio albums ‘Discovery’ editions, Box-set of all 14 albums with photo book, Audio downloads of ‘Discovery’ albums and box-set, The Dark Side of The Moon – ‘Immersion’ and ‘Experience’ editions, Vinyl LP and digital editions

November 7th 2011: A Foot In The Door -The Best of Pink Floyd, Wish You Were Here – ‘Immersion’ and ‘Experience’ editions, Vinyl LP and digital editions

To see the full details of the Why Pink Floyd collection, have a look at “Why Pink Floyd” Exciting New CDs, DVDs and Blu-Ray With New Material.