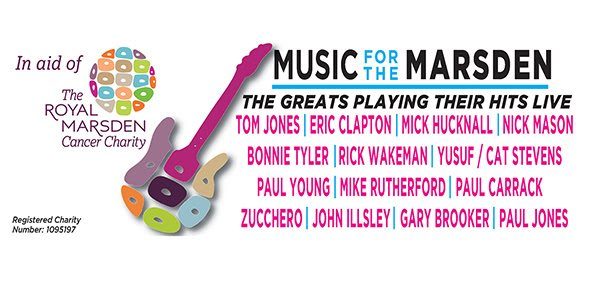 Pink Floyd drummer Nick Mason is to join a star studded collection of some of the biggest names in music at a massive charity concert at London’s O2 Arena on 3rd March 2020.

Funds raised from the concert will go towards building The Royal Marsden’s brand new, state of the art treatment and research facility, the Oak Cancer Centre.

Eric Clapton said, “This is a great cause and I’m honoured to be part of the efforts to raise money for The Royal Marsden. I also couldn’t say no to the opportunity to work with the other artists and bandmates in the line-up. I am sure it’ll be a fantastic evening providing much needed support for this pioneering hospital.“

More artists will be announced at a later date with each of them performing a few songs backed up by a formidable house band.

I don’t want to start any rumours, but it would be rather a good thing if David Gilmour turned up and did a couple of numbers too! It is quite close to his birthday on 6th March but he could give us all a treat instead! 😉